The problem with all-girls schools 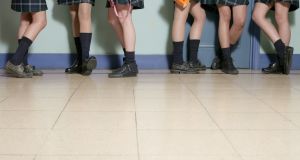 There is a popular notion that single-sex education is better for students, and particularly for girls. The extensive body of research into the relative merits of single-sex and co-education doesn’t come down conclusively on either side, but this perception informs the choices of many Irish parents.

Increasingly, however, psychologists and educationalists are asking whether single sex schools are resulting in increased pressure on girls and contributing to a rise in social and emotional problems.

A recent report by the youth group Comhairle na nOg, So, How Was School Today?, canvassed the views of more than 3,200 young people aged between 12 and 17 on their attitudes to school.

It found that girls in single-sex schools had higher levels of exam stress compared to boys.

In addition, girls in single-sex schools tended to be more negative about their experience of school than boys.

Boys also felt more able to talk to teachers than girls and were more likely to say they experienced good student support.

So why do girls seem less happy than boys in single-sex schools?

Stella O’Malley, psychotherapist and author of Bully-Proof Kids agrees and says, girls, in particular, may suffer emotionally and socially in single-sex schools for a range of reasons.

“I believe that there is more pressure to perform socially for girls in single-sex school,” she says.

“Although they may do better academically in single-sex schools, what they lose on the swings they gain on the roundabouts, as the pressure to perform socially can be too intense for many girls and so they ultimately end up under-performing in all spheres.”

“The psychologist Oliver James identified high-performing 15-year-old girls as the unhappiest group of people in England or Ireland and I would agree with his findings – in my counselling work, I meet high-performing teenage girls more often than anyone else.

“These girls tend to be perfectionist and very self-motivated. When their peers are similarly driven, intense competition and rivalry might mean that the results are impressive but the implications for long-term mental health issues often significantly reduce the potential for them to lead successful and satisfying lives.”

Child psychologist Peadar Maxwell says socialising with the opposite gender is an important aspect of education.

“Boys and girls need to see one another as equals and to learn to cope with all of the challenges of sharing study and work spaces. Single sex schools might not offer that opportunity by creating a divide that doesn’t exist in society.

“If a child does attend a single sex school I think it would be wise of their parents to offer them opportunities to have friendships and shared interests in a mixed-gender setting so that they grow to be comfortable with the real world situation of males and females working and living alongside one another with mutual respect and equality in relationships.”

There are, however, thousands of students who have flourished in single sex girls’ schools and robustly defend the model.

Barbara Ennis, principal of the all-girls school Alexandra College in Dublin, says she had not seen any evidence of heightened anxiety levels or mental health problems, such as eating disorders, compared to students in co-educational settings.

“Girls work hard and put themselves under a lot of pressure to do well academically and socially. They far outstrip boys in the Leaving Certificate exams and attain higher academic results than boys whether they attend single sex or co-ed schools,” she says

“What needs to be done in a school setting, is to help ameliorate stress and associated problems to empower girls to be confident, self-assured young women and help them to tackle peer pressure by enabling conversations about how it has a powerful role to play in developing anxiety, as does parental pressure.”

“We need to be having a different conversation – not looking at the merits or otherwise of single-sex versus co-education in tacking mental health and social issues but a conversation about how all schools can help students to find a vocabulary and language to describe their feelings and worries.”

May McCarthy, who attends Coláiste Mhuire, an all-girls school in Ennis, Co Clare, feels that, on balance, a single-sex school suits her best.

“I definitely think I do better in an all-girls school than I would if I was in a mixed one,” she says.

“I think there is probably a calmer atmosphere in our school and it’s easier for us to concentrate and for the teachers to have control.

“But having said that, I think if girls don’t do any activities where there are boys involved, they wouldn’t be able to mix easily and would find it hard to talk to them.”

Dr David Carey, director of psychology at City Colleges and dean of the College of Progressive Education, says parents should care less about gender mix and more about whether or not their child is happy at school and if teachers are doing a good job.

“I don’t favour one type of education over the other,” he says. “Instead I favour a school were the adults in charge care more about what is in the head than what is on the head; where young people are treated with dignity and respect by every adult in the school, where a school head will have no truck or patience with any adult who disparages or shames student and where there is a completely harmonious environment.

“Frankly I don’t know why students supposedly perform better academically in single sex schools and I don’t think this is an issue that needs much further debate or research. Academic success has nothing to do with successfully living your life in this crazy world we adults have created.

“So send your children to the best school you can, with a proper mix of academic and social opportunities and forget about all the rest.”

Aoife Connolly, a second-level student, recently decided to move from her all-girls schools to a co-ed school due, in part, to stress caused by “unhealthy competition” between the girls.

“I went to a mixed primary school and got on great and then I decided to go to the local girls’ school and that’s when I began to suffer from stress,” she says.

“Aside from the whole clique thing, there is also a hugely competitive edge to it. Everyone wants to do better than the next girl and keeping up that level of competition can be a nightmare as you are not studying for yourself or for your future, but purely to be better than your peers – and that’s quite sad.

“I changed schools this year to a co-ed one and my life has been transformed. I still get great grades, but in a much more relaxed environment.

“No-one is going to judge me if I do a bad test or if I am off-colour one day and if I do really well, the most that will happen is I might get teased but in a jokey way – there is never any malice.

“Boys and girls are friends together so there is none of the ‘alpha girl’ situation that I was used to before and if I’m being honest, I think that that single-sex schools are un-natural as men and women aren’t segregated in life, so why force it on students?”