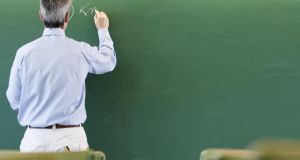 The two teachers’ unions are quick to point out that bilateral meetings about the changes involving themselves and the department have taken place over the past two years.

The teachers’ unions and the Department of Education and Skills are at loggerheads again with continuing dissatisfaction over implementation of junior cycle reform.

The spectre of non-co-operation and even more strident action remains a possibility as long as this disagreement remains.

It may seem a headstrong move by the unions for such strident talk after just one meeting of the national working group on reform, held last Friday, but it reflects the level of frustration felt by the Teachers’ Union of Ireland and the Association of Secondary Teachers, Ireland. Both unions are quick to point out that bilateral meetings involving themselves and the department have taken place over the past two years so the issues have been discussed. There can be no room for confusion over the positions being taken by the two sides. And yet confusion seems to reign, with the department saying it had moved significantly to address concerns raised by teachers, and the teachers asking yet again for the fine detail of how the changes brought by junior cycle reform are going to take place.

“For me, Friday produced more questions than answers,” said Gerard Craughwell, president of the TUI. “As we stand there is no chance whatsoever our members will engage with this. We needed to deal with the micro but we got the macro,” he said.

Similar concerns were expressed by the ASTI. The department moved to slow down implementation of the reform with only one subject, English, expected to come in the 2014-2015 academic year. But this was still too soon, the union said.

“We are looking for a deferral of the current timeframe,” a spokeswoman for ASTI said. “This deferral would be used to brief teachers in schools properly; to make sure the necessary professional development is taking place; to outline the resources that are going to be put in place to implement the framework,” she said.

“We believe there isn’t the fine detail. That could be delivered but we don’t see it yet. We have reform coming down the tracks that doesn’t have the confidence of teachers,” she added.

From the department’s perspective the issues are clear and questions readily addressed. It brought a document to the meeting last Friday which provided lots of new details, for example on in-school assessment. This would be limited to two school-based components and the final assessment would comprise a single paper of two hours or less.

Yet this was nowhere near where the teachers are coming from, which is firmly focused on how it will all play out in the classroom and how it will work for the students and for school management.

“A new approach has to be taken to timetabling but there is no template for how to do that,” the spokeswoman said.

“A lot of aspects of the framework [on reform] are exciting and there is an appetite for the changes but there isn’t an explanation. Teachers do not know what is required of them,” she said.

Mr Craughwell raised similar concerns, for example about in school assessment. It must have the confidence of teachers, students and their parents but it must also be possible to challenge grades. And the only way to adjudicate on this is with the student’s project work in hand.

The ASTI said it would continue to engage with the downstream meetings that flow from the initial national meeting. These sub-committees are expected to deal with the specifics of assessment, in-service training and other elements of change. The union warned, however, that “time is running out” given reform begins next September. “We have to take whatever action is required to have these issues addressed,” their spokeswoman said. “This is not about conflict, this is to ensure teachers’ concerns are heard so we will continue to attend working meetings.”

Nor will the TUI “be found wanting” when it came to building agreement to allow Junior Cycle reform to proceed, Mr Craughwell said. “Let’s stop the showboating on this, let’s sit down as professionals and deal with the issues one issue at a time.”

Things don’t sound promising however, particularly with the TUI which is opposed to the idea of in-school assessment, a fundamental component of the planned reform. “It is just not going to happen,” he said.

Meanwhile, Ferdia Kelly, general secretary of the Joint Managerial Body (JMB), which provides advice and support and negotiates on behalf of school management in 400 voluntary secondary schools, said a “roadmap for dialogue” had now been set out.

“Certainly from a JMB point of view and most particularly looking to the future of young people in our schools, we’d call on all parties to engage positively and constructively in that dialogue,” he said.

“We’re certainly open to dialogue and we will participate in that dialogue with all parties and most particularly the teachers because the change won’t happen if we don’t have the key people – the teachers – fully engaged in it,” he said.