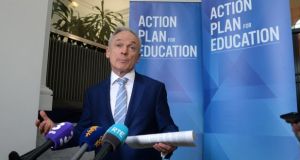 Minister for Education Richard Bruton: this new process has ‘the potential to change the course of education in Ireland’. Photograph: Dara Mac Donaill

Parents in four locations have been asked to express their preferences in relation to the patronage of new post-primary schools to be established next year.

Minister for Education Richard Bruton launched a new Patronage Process System (OPPS) website, which he said would provide objective information to parents and guardians to allow them make an informed choice in expressing a preference for the model of patronage and language medium for their child’s education.

The four schools to be established in 2019 will serve Donaghmede, Howth and Dublin 13; Galway city and Oranmore; Laytown and Drogheda; and Co Wicklow.

Mr Bruton recently announced the establishment of 42 new schools over the next four-year period from 2019 to 2022 after his department examined the future need for primary and post-primary schools across the State.

“We are fortunate in Ireland to have a growing population. However this growth puts pressure on our public services. If we are to have the best education and training system in Europe, we must ensure that we adequately prepare for this future need by planning for the necessary modern school facilities now,” Mr Bruton said.

“Parental preferences for each patron, from the parents/guardians of children who reside in the school planning areas concerned, together with the extent of diversity currently available in these areas, are key to decisions in relation to the outcome of this process.”

About 90 per cent of the State’s 3,300 primary schools remain under the patronage of the Catholic Church.

Census data has been used to identify areas where there is most likely to be a demand for multidenominational or nondenominational schools.

The patronage determination process for new schools is overseen by the independent New Schools Establishment Group (NSEG) set up in 2011 to advise the Minister on the patronage of new schools.

The OPPS may be accessed at patronage.education.gov.ie