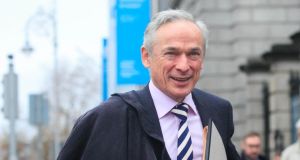 Minister of Education Richard Bruton: he is reviewing a policy-change which could allow teachers to accept or reject collective pay agreements on an individual basis. Photograph: Gareth Chaney Collins

Are we about to see the first forced redundancies in the public sector in years? It certainly looks that way – and a small number of members of the Association of Secondary Teachers in Ireland (ASTI) may well be in the firing line.

Up to now, teachers who have become surplus to requirements have been redeployed to other schools in need of teachers. However, the Government has withdrawn this protection for members of the ASTI following its rejection of settlement proposals last month.

Some 60 secondary schools have received letters notifying them of their surplus staff. While the final number of teachers is likely to be lower when calculations are finalised at the end of March, the precise numbers do not really matter. If even a single ASTI member loses their job, it will deepen divisions and spark a new round of industrial action.

Any move towards forced redundancies has the potential to significantly change the face of this long-running dispute. As of now, the ASTI appears isolated and divided over its future direction, given the wafer-thin majority of members who rejected settlement proposals last month.

If there is anything which galvanises a union, it is a sense that its members’ livelihoods are at risk. It is hard to see other unions – even those that do not have the ASTI’s best interests at heart – supporting any action which results in fellow trade union members losing their jobs.

For the public, too, there is likely to be much greater sympathy on an issue such as redundancy than opposition to the union’s refusal to work additional hours.

This is tricky territory for the Government. It warned the union that protection against redundancy would be withdrawn if the union rejected settlement proposals. Any move to step back from those warnings would doubtless be labelled as a cave-in by critics and undermine the credibility of any future warnings.

In fact, if anything, it has signalled an even more strident stance. Minister for Education Richard Bruton is reviewing a policy-change which could allow teachers to accept or reject collective pay agreements on an individual basis.

The move would – if implemented – give a financial incentive for ASTI members to leave the union. However, it could stoke fears among other unions that they, too, could face similar treatment.

A key question for Mr Bruton – who may well be at the centre of a Fine Gael leadership contest – will be how far to go in the dispute.

While the party base may relish a strident defence of public sector pay policies, the wider trade union movement may well feel this is a step too far.