Students say ‘targeted cuts’ to be met with ‘targeted voting’

Protests against cuts to student grants take place in Dublin, Cork and Sligo 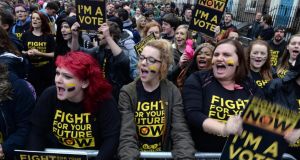 From left; Saoirse Leonard, Laura Smith and Sharon Dore, joined third level students from Dublin and Maynooth taking part in ‘Fight for your future now’ a demonstrations to protest against the possibility of cuts in maintenance grant in the Budget– on Molesworth Street, Dublin on Tuesday. Photograph: Dara Mac Dónaill/The Irish Times

Hundreds of students marching in Dublin today heard that “targeted cuts” to grants would result in “targeted voting” by the student cohort. Head of the Union of Students in Ireland (USI), Joe O’Connor said that the union was developing a student electoral register with voter registration drives being held across the country. He said the USI intended to have more than 50,000 names on the register by the local and European elections next year.

“We feel we will be able to marshal and radically alter the direction of any election or referendum,” he said.

The Dublin protest, which was made up of students from third-level institutions including DIT, Trinity, NUI Maynooth and the National College of Ireland, followed two earlier protests in Cork and Sligo.

Mr O’Connor said students were marching because “every ounce” had been squeezed out of higher education over the course of the last four budgets.

“Students across the country in Dublin, Cork and Sligo have gathered today to send a clear and unified message to the Government in all three locations: students and families are at breaking point.

“ They have been hit by cuts to the grant in the last four budgets, the cost of college continues to be on the increase and they cannot take anymore in the upcoming budget.

“Higher education is not public spending it is public investment and we’re calling on the Government to prioritise that in the upcoming budget .”

Cork protest
A heavy downpour saw numbers drop to about 300 for the final rally on the Grand Parade where a series of speakers strongly criticised the Coalition for its austerity programme and warned of student opposition to any further cutbacks in maintenance grants.

CIT president, Danny O’Donovan said 30,000 students in Cork city were contributing significantly to the local economy through their spending but cutting the maintenance grant would have a significant impact on shopkeepers, restaurants and other service providers.

UCC Students Union president Podge Haughney said that people should look around them and realise that one in every three was going to be forced to emigrate as a result austerity.

Students who protested in Sligo included those attending Sligo IT, St Angela’s College, Athlone IT, NUI Galway, GMIT and Letterkenny IT. Kevin Donoghue who is USI vice president for the Border, Midlands and Western region, said students had marched to highlight the importance of the maintenance grant and back to education allowance.

“We marched in Sligo to send a clear message to the Government: we can’t take any more cuts to existing education supports and we won’t take further cuts lying down,” he said.