Student diary: ‘Eavan Boland – thankfully – came up. Others who staked it all on Plath lost’

Two days into the exam, Lauren Conway is getting into her study groove 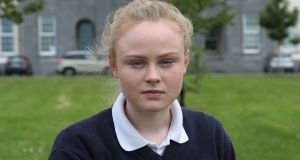 Lauren Conway, a Leaving Cert student at Coláiste Éinde, Galway: “The question on ‘Hamlet’ asked us to examine it as a disturbing psychological thriller, and I think most students were quite happy with this question.” Photograph: Joe O’Shaughnessy

It was the discussion of the Leaving Cert: which poets will appear on the paper?

Like a lot of my classmates, I was really nervous about this. While I was very relieved that Eavan Boland came up, some of my classmates had staked it all on Plath – and lost. They weren’t so happy.

I’m deep into the study groove by now. I’ve a non-identical twin sister who is also going through it at the same time. She goes to Salerno, the all-girls school next door; I decided when in sixth class that I really wanted to be in a co-ed school, so we went our separate ways.

Now we are a source of support for each other but we also study separately – otherwise we would just keep talking and distracting each other.

We share a room and we’ve an arrangement where she gets to study there and I wander down to my neighbour’s house.

They are so kind and lovely to let me study there and it’s always nice and quiet: nobody shouting about dishwasher tablets or who broke the Hoover. It means that, when the day is done, I can go home and feel the space and time is really my own.

It’s not all study, because downtime is really important. I was really enjoying a particular art book from the 1970s by John Berger, Ways of Seeing, although it is a bit heavy during the exams so I have put it aside for a while.

To switch off for a while, I watch It’s Always Sunny in Philadelphia and just try to get down to the prom in Salthill for a head-clearing stroll.

My head, however, is still full of English. Shakespearian quotes reverberate. The question on Hamlet asked us to examine it as a disturbing psychological thriller, and I think most students were quite happy with this question.

One aspect of the English paper that I’m not so crazy about is the comparative text question.

I love English and I love literature but I feel that asking a student to focus on three different texts at the same time is a little bit strained and limits how deep we can go.

It’s odd to think it will all be over next Friday when I sit the German exam.

I suspect it might be anti-climactic but I am looking forward to the summer: I’m going to get a job, organise a gig and then before I know it, I will – hopefully – be in art college in Dublin.