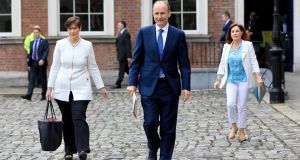 Minister for Education Norma Foley, Taoiseach Micheál Martin and Minister of State with responsibility for special schools Josepha Madigan at the launch of the roadmap for reopening schools. Photograph: Julien Behal

Schools will be provided with funding to convert areas such as PE halls into temporary classrooms if necessary in order to reopen in late August.

The Government announced a financial package of more than €375 million to support schools reopening, agreed during a Cabinet meeting on Monday.

The funding will allow for an additional 1,080 secondary school teachers to be hired, which includes 120 guidance counsellors.

An additional €52 million will pay for enhanced cleaning and hygiene measures to reduce the risk of Covid-19 transmission. All teaching principals at primary level will receive a minimum of one release day per week to relieve the administrative burden arising from the changes and coronavirus recovery.

There will be €40 million to fund increased supervision of secondary school students to minimise interaction between different groups, particularly during lunch and other break times.

The Teaching Council is to launch a recruitment campaign for secondary school teachers, which will include a targeted effort to recruit from 2,000 teachers registered with the council not currently working in education.

There will be a national panel of substitute primary school teachers given year-long contracts, who will be available to substitute on short notice.

Minister for Education Norma Foley said outbreaks of the coronavirus in schools would be managed on a case-by-case basis, “depending on how it happens and in what context it happens”. In many scenarios a class might be asked to go into self-isolation following a confirmed case, rather than the entire school, she said.

At primary level each class will be deemed a “bubble”, with children then grouped into smaller pods, which will be a metre between each other. There is to be no maximum number of students to a pod, with schools to set their own limits based on classroom space.

Younger pupils from junior infants up to second class will not be required to adhere to social-distancing rules, due to difficulties enforcing such measures. Second-level students will have to remain at least a metre apart from each other, and two metres where possible.

Pupils will not have to wear face masks, and nor will teachers unless in prolonged close contact with a pupil.

Schools will be allowed to draw down capital grants to convert areas such as PE or assembly halls into temporary classrooms if required. Schools will also be able to avail of funding to switch from double to single pupil desks.

Ms Foley said existing classrooms would in the first instance be “decluttered” to allow appropriate physical distancing between pupils. If that was not possible schools would then look at repurposing other rooms, or using nearby facilities such as parish halls, as a “last line” for classrooms.

Minister of State with responsibility for special schools Josepha Madigan said some at-risk children with complex needs would be unable to return to school.

Designated teachers would be allocated to “provide support to these children” from the schools’ staffing resources, she said.

More broadly, department officials are also understood to be examining how teachers in high-risk Covid-19 categories who cannot return can be facilitated in working remotely.

Speaking on Monday, Taoiseach Micheál Martin said the closure of schools in March “was a moment when everyone understood the dramatic nature of the pandemic”.

Despite the efforts of schools, teachers, and parents Mr Martin said it was clear “remote learning is simply not enough”, and was “no substitute for students learning in schools”.

Students from disadvantaged backgrounds had also been “disproportionately affected” by the closure of schools, he said.