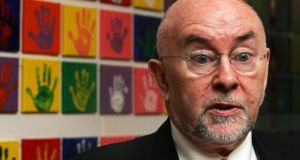 Minister for Education Ruairí Quinn said he was not satisfied with the delays facing parents in getting assessments of their children by health authorities. Photograph: Cyril Byrne/The Irish Times

Schools will be obliged to accept children with special needs under robust new rules proposed in a Government advisory report.

The findings of a major review by the National Council for Special Education are likely to have far-reaching consequences on how education services are provided to future generations of children with special needs.

One of its key proposals is to change the way 10,000 learning support teachers are allocated to mainstream schools.

In future, these posts should be based on the individual needs of students rather than the number of class teachers or students in a school, the report says.

Overall, as many in one in four children in the education system have some difficulties learning due to conditions or disabilities ranging from dyslexia to autism.

While funding for special education services has increased over the past decade, the council’s report says there is still room for improvement.

The State body says its proposals will help ensure supports are used to maximum effect to drive improved outcomes for children with learning difficulties.

Among the report’s key recommendations include:

* Every child with special needs be guaranteed access to their nearest school that is resourced to meet their needs, regardless of enrolment policies

* A school must enrol a student with special needs if directed by officials, on the basis that the school will be provided with resources

* A new model for for allocating teaching resources in mainstream schools based on the profiled needs of students, rather than on the number of class teachers or students in a school

At a press conference today, the national council’s chief executive Teresa Griffin said the needs of students were at the heart of the report’s proposals.

“We want all children with special education needs to be welcome to enrol in schools where teaching resources are already in place and where teachers can focus on each student’s individual needs,” she said.

Minister for Education Ruairí Quinn said he will take on board all of the report’s proposals, in particular the recommendation to change the way resources are allocated.

Any changes are likely to take time given that further consultation is likely with teaching groups.

Some of the report’s proposals, however, have drawn sharp criticism from the Irish National Teachers’ Organisation today.

It said changes to the allocation of resources could dismantle two decades of progress integrating special needs children in mainstream schools.

“If implemented, bureaucracy will once again become the barrier to children getting resources. Additional paperwork will be demanded of class teachers already struggling with some of the largest classes in the EU,” the union said, in a statement.

Mr Quinn also said he was not satisfied with the delays facing parents in getting assessments of their children by health authorities.

The outcome of these assessments currently guide a child’s access to education and other services.

New figures show that hundreds of children are waiting in excess of six months for assessments, in breach of legal time-limits.