More than 120,000 Junior and Leaving Cert students to begin exams with English 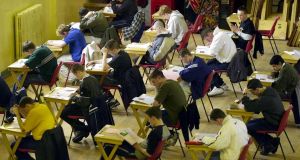 The long wait is over for 120,000 Junior Cert and Leaving Cert students who are to to begin their exams on Wednesday in 5,000 test centres across the country.

This means points increases are likely across a number of sectors in high demand, such as business and science.

A further 59,522 students are due to sit the Junior Cert.

A combination of bonus points for higher maths, along with “project maths” reforms, means about one in three Leaving Cert candidates will undertake the higher-level exam this year.

From this weekend, about 5,000 superintendents involved in supervising the written exam received locked boxes containing the four million exam papers which will be used over the coming fortnight.

Pat Burke, chairman of the State Examinations Commission, sent his best wishes to candidates ahead of the beginning of the exams.

“The State examinations represent the culmination of much hard work by students, their families and schools,” he said.

“The commission is committed to ensuring that the examinations are conducted to the highest standards in an open and fair manner. It is our objective to enable each candidate display his or her achievements during what can be a stressful time.”

The number of candidates with additional needs who require “reasonable accommodation” is due to rise to almost 20,000.

The issue has proved controversial over recent months, given the number of students whose requests for reasonable accommodation were rejected without official explanation.

Following a legal action, the commission has begun issuing details of why they were refused these supports.

Exam candidates, meanwhile, are being advised to stay calm, remain positive and draw on support available from fellow students, teachers and family.

Union president Gerry Quinn said: “Students will have worked hard up to now and in general will find that they are better prepared than they think,” he said.