While many parents fear injuries, experts back benefits of carrying schoolbags 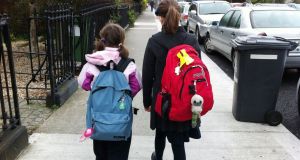 Research indicates most Irish schoolchildren carry schoolbags that weight more than 10 per cent of their bodyweight. Photograph: Bryan O’Brien 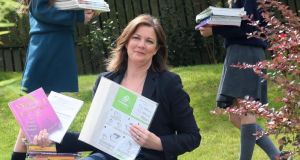 Margo Fleming was so frustrated with the weight of her daughters’ schoolbags she developed a product to split books into lighter sections. Photograph: Lorraine O’Sullivan

In a fit of frustration, Margo Fleming placed her daughter’s schoolbag on a weighing scales.

The hardback books, sports equipment and copybooks amounted to a grand total of 15 kilos.

“I was horrified,” she says. “That’s the equivalent of two large Tesco bags of potatoes . . . would anyone be happy for their daughter to carry around that weight?”

Her daughter – a Junior Cert student at the time – had 13 subjects, with books, copybooks and folders to match.

“I couldn’t watch her with struggling with this heavy bag, so I ended up driving her to school,” Fleming says.

If figures compiled last week are anything to go by, many other parents are doing the same.

Almost a third of parents of primary school pupils said their children could not walk to school because of the weight of their schoolbags, according to a survey by the National Parents Council – Primary.

The council, which gathered more than 3,000 responses in just four days, says it is emerging as the single biggest issue among primary-school parents.

Áine Lynch, the council’s chief executive, said almost 70 per cent of parents reported a significant concern about the weight of bags, while 31 per cent said their children couldn’t walk to school because of the weight.

The issue is of even greater concern among parents of junior secondary school students, who often face a sudden increase in the loads they are forced to carry.

Much of this concern focuses on the impact on the spine, which is at a critical stage of development in children aged between 12 and 14 years.

“The matter is of such as serious nature,” warned Paul Beddy, a director of  the National Parents Council – PostPrimary, “that at some point in the future the implications for this State could be comparable to the claims for Army deafness disability payments.”

But does the evidence for widespread back pain linked to heavy loads among young pupils really stack up?

Dr Sara Dockrell, an assistant professor at Trinity College Dublin and physiotherapist, has over 20 years’ experience of research in this area and has published widely in clinical and ergonomics journals.

Despite the siren warnings, she says children should be encouraged to carry schoolbags to and from school.

She notes there is considerable inconsistency in research linking back pain among children to carrying schoolbags.

By contrast, there is far greater evidence showing a link between sedentary lifestyles and obesity among children.

“Walking to and from school while carrying a schoolbag could count as moderate activity and therefore it should be encouraged, and not discouraged,” she told the Oireachtas committee.

“Not carrying a schoolbag could be seen to be a barrier to physical activity and may deny children the benefits of daily resistance exercise as they travel to and from school.”

She carried out the first national study into the issue , published in 2015, which involved examining the impact of carrying schoolbags on more than 500 children.

More than half of these children were driven to school, while just over a third walked.

The majority carried their schoolbag for 10 minutes or less on the way to school. The average schoolbag weight was five kilos.

“I’m not suggesting for a minute that we should expect children to carry excessively heavy loads,” she said, “but carrying a weight on your back is not necessarily a problem.”

While the reported level of back pain or shoulder pain among children surveyed in the study was high, she said pain in children was complex and the relationship with carrying a schoolbag was not simple.

For example, her research found that “psychosocial factors” – perception of schoolbag weight and emotional wellbeing – and a history of pain were linked to shoulder pain.

Her research also found non-physical factors – such as the weight of a schoolbag, the duration it was carried or the method of travel to school – were associated with schoolbag-related pain.

Latest international research also does not prove a link between heavy bags and back pain in adolescents; it just shows an association.

Back pain is also caused by sedentary lifestyles: being slumped in front of the TV, for example, leads to weaker back muscles and an increased likelihood of back pain.

And while carrying a heavy bag affects how you walk, there is no evidence that it causes any lasting issues such as scoliosis, which is curvature of the spine.

Notwithstanding the complexities of the issue, politicians feel there is a real public health issue that needs to be tackled urgently.

Jim Daly, chairman of the Oireachtas committee on children, is a former school principal and father-of-four.

He says he was prompted to seek action when he saw that policymakers in his wife’s home country of Estonia were looking at introducing legislation to limit schoolbag weights.

Daly said that, while concerns over schoolbags have been debated over the years, there has been little serious action to minimise potential harm.

The Department responded by sending out a circular letter to both primary and secondary schools advising them of the report’s recommendations and saying that it was “incumbent on school authorities from a health and safety viewpoint to identify the problem where it exists and take whatever steps are appropriate to deal with it”.

The circular was reissued to schools in 2005. The lack of decisive action, Daly says, is not good enough.

“We’ve heard that young students who are carrying unnecessarily heavy schoolbags may develop acute back and shoulder pain, and that the previously proposed guidelines are now complicated by the growing levels of childhood obesity,” he said.

“This is an issue that has been discussed at length down through the years without serious, enforceable action being taken in bringing about effective change.”

He said the committee planned to meet again shortly with the aim of “identifying how best to bring about this change, be it regulation or legislation perhaps, and set out our plan to agree positive action on the matter”.

Parents such as Margo Fleming haven’t waited around for official action.

After watching her children struggle with heavy schoolbags, the Wicklow mother-of-four came up with the idea of “booksplits”, cut-and-paste packs that allow students to leave at home the section of textbooks not being used in class.

“It came out of pure frustration,” she says. “No one seems to take it seriously, so I came up with a way of splitting books into sections using special covers.”

She says the business is going from strength to strength, with parents seeing an added resale value in the split books.

Early research, though, shows this hasn’t significantly reduced the weight of bags given that children continue to do book-based homework.

In addition, many schools that switched to using iPads are – anecdotally, at least – switching back to books, due to a perception that they result in better learning outcomes.

For Áine Lynch, the solution lies in simply reducing the volume of books required.

“It’s very hard to look at weight without looking at other issues as well. It’s been mentioned a few times already around the homework issue,” she said.

“We are clearly stating that we are looking for a review of how much text books are needed and relied on.

“If we muddy the waters with weights, or costs, or what homework should look like around this particular issue, we keep missing the point.”

So, given the contrasting and often confusing research on the topic, what on earth should parents do?

Dr Dockrell says carrying a well-designed and correctly fitted backpack over both shoulders has been accepted as the safest way to carry a schoolbag.

Any adverse effects could be minimised by using a bag with a padded back and hip strap, if possible, with the heaviest items placed close to a child’s back.

HOW TO CARRY A SCHOOLBAG SAFELY

1. Buy a backpack-style bag with adjustable padded shoulder straps to fit the size.

2. Look for a padded back and hip strap if possible.

3. Put the heaviest items in the backpack close to your back.

4. Wear the bag on the back with the straps on both shoulders.

5. Carry only what is needed. Think ahead and only carry books and other items as required. If there is a locker available in school, make good use of it.

6. Carry only when you have to.

7. Avoid swinging the schoolbag around and lifting it on the back.

The first national study of more than 500 children’s schoolbags in Ireland revealed the following:

The proportion of pupils carrying a schoolbag

The average weight of a schoolbag

The mean bodyweight a schoolbag represented

The average duration a child carried a schoolbag

The proportion of children using backpacks as schoolbags

The proportion of children using both straps