Parents believe maths better liked than in the past, survey finds 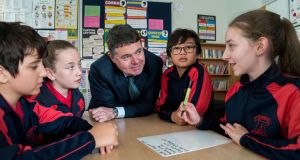 A majority of parents (61 per cent) believe their child’s attitude to maths is more positive than their own when they were the same age, according to a survey released to coincide with Maths Week Ireland 2019.

The research suggests a considerable shift away from a negative mindset in public attitudes to maths. Since 2006, Maths Week has aimed to help people get over their fears associated with the subject and to highlight its fun aspects - in addition to promoting science, technology, engineering and mathematics (STEM).

Some 86 per cent of people believe maths is important in creating future career opportunities for their children, while 71 per cent of parents are confident with helping their child with maths and numeracy, the survey found – it was conducted in September among 1,000 adults by Coyne Research.

A total 85 per cent of parents believe that if their child is encouraged to have a more positive attitude towards maths, they will be more successful in learning the subject.

Half of adults said they, or their spouses, use maths actively in their jobs while almost two thirds (64 per cent) said maths plays an important role in their daily life.

A key message of the week, which is run on an all-island basis, “is to encourage parents to support their child’s interest and enjoyment of maths and, as we can see, such skills are hugely beneficial throughout all stages of life”, she added.

Having a high percentage of parents confident in helping their child with maths was especially welcome, she said. “Maths provides positive challenges and engaging in it without a fear of failure is crucial to developing an enjoyment of the subject and numeracy in general.”

More than 400,000 people, including students and the general public, were registered to take part in this year’s Maths Week, which runs until Sunday October 20th. As well as the overall benefits of maths and numeracy, this year’s events are focused on the use of maths in the fields of climate change and sports.

“Maths in the City” returns to Dublin for an extravaganza of street maths in College Green at the Bank of Ireland plaza on Saturday, and a “Celebration of Mind” takes place on Sunday at the Pumpkin Festival in the Botanic Gardens Dublin.

There are also public lectures and events at the National Library of Ireland and a Maths Trail in Merrion Square, Dublin, which features puzzles and games but also highlights the contribution of Irish – and in particular female – mathematicians.

Details of outstanding events are at www.mathsweek.ie