Overpopulation: will we have enough to go around?

As the world population continues to grow, we have not answered the question as to how all will be fed in future 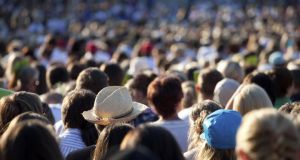 There is little agreement among experts as to what is the maximum population that the environment can sustain on Earth. Photograph: Getty

The population division of the United Nations marked October 31st, 2011, as the “Day of Seven Billion”. The world population is now above that figure and climbing. The global ecosystem is seriously stressed, and climate change is greatly aggravated by the expanding population. Accurate estimates of growth are essential for assessing our future wellbeing.

Before the Black Death in the 14th century, there were about 450 million people. After the plague there were 370 million. Since then there has been continuous growth. The growth rate peaked at 2.2 per cent a year in 1963, but has since declined to about 1.1 per cent. Population growth varies widely from place to place, but in most countries there has been a transition to smaller families in recent decades.

The UN estimated a growth rate of 75 million per annum in 2000 and the CIA’s World Factbook gave a comparable figure. Global life expectancy is about 67 years. Death rates change dramatically due to disease, war and natural disasters. Better sanitation and medical advances reduce infant mortality and more efficient agricultural practices reduce the incidence of famine. So life expectancy is on the up.

Malthus calculation
Many mathematical models show exponential growth: this implies a fixed time for the population to double. In 1798 Thomas Malthus predicted that the exponentially growing population would exhaust the world food supply within 50 years.

Although scary, this may not be pessimistic enough: during the second millennium, each doubling of population took half as long as the previous one. This pattern corresponds to “hyperbolic growth”, with the population becoming unbounded within a finite period, much more worrying than exponential growth.

At the more optimistic end of the spectrum, we have “logistical growth”, where there are constraints on the maximum population. An early model for this was proposed by the Belgian demographer Pierre François Verhulst, who refined the model of Malthus, introducing a number called the carrying capacity. This is the maximum population that the environment can sustain. The resulting growth is initially exponential, but flattens out as it approaches the carrying capacity. Alas, there is little agreement about the Earth’s carrying capacity.
What lies ahead? A balanced plateau or a Malthusian catastrophe with mass starvation? Current projections all indicate an increasing population, but forecasts vary widely. The best current mathematical models give expected values for 2100 ranging from nine to 13 billion, with the most probable value being 11 billion.

Total fertility rate is a critical factor in determining growth, and this has been falling in recent decades. As a result, it is considered unlikely by experts that there will be another doubling of population in the 21st century. The population is now seven times larger than when Malthus uttered his gloomy and inaccurate prognosis.

Food production has increased dramatically, much more rapidly that he anticipated. But this has come at great cost in terms of environmental stress, pollution and global warming. There is enough food to go round. The problem is that it doesn’t.