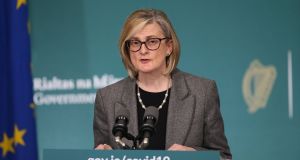 Liz Canavan, assistant general secretary at the Department of the Taoiseach: ‘Some people have holidays booked and are wondering what to do. We are acutely aware of this and we would ask you to bear with us.’ Photograph: Nick Bradshaw

The Government is finalising “a roadmap” for safe overseas travel “very shortly”, the assistant general secretary at the Department of the Taoiseach has said.

Liz Canavan told the Government’s Covid-19 briefing on Wednesday that the advice is still to avoid non-essential travel abroad.

Last week the Government said foreign travel restrictions would be eased from July 9th, with travellers permitted to move between countries on a “green list” with similar levels of coronavirus infection.

At the end of the week, the National Public Health Emergency Team (Nphet) came out strongly against resumed overseas travel.

The State’s chief medical officer, Dr Tony Holohan, said that the public health advice was still against non-essential international travel, and he urged people to cancel their foreign holidays to avoid importing more cases into the State.

A quarter of new cases confirmed last week were linked to overseas travel.

On Wednesday Ms Canavan said that the Government understands the issue of foreign travel was causing “great uncertainty and worry”.

“Some people have holidays booked and are wondering what to do. We are acutely aware of this and we would ask you to bear with us,” she said.

Ms Canavan said new outbreaks of the virus in other countries in recent weeks shows “how easy it is for this virus to begin to take hold again” and that countries that have had a low incidence were now seeing a resurgence.

She warned, “Complacency is our biggest enemy now.”

Social Democrats co-leader Róisín Shortall said that the “mixed messages” from the Government and Dr Holohan were “leading to confusion and concern among the public”.

She called on the Government to take immediate action on foreign travel to prioritise public health and to provide clarity to the public.

“We currently have no effective way of dealing with the importation of Covid-19 from badly affected countries as the guidance on self-isolation is not legally based and enforcement is inadequate,” she said.

New figures released by the Department of Justice on Wednesday night showed that the number of new arrivals into the country answering follow-up calls to check that they are self-isolating for 14 days at an address continues to decline.

The number of passengers coming into Dublin Airport who answered calls two days after their arrival fell to 61 per cent from 68 per cent last week when almost 10,000 additional passengers arriving in the last week of June were included.

The figures show a sharp increase in the number of arrivals at the airport. Some 9,355 filled out the Covid-19 passenger locator form between June 21st and 28th compared with a total of 19,866 over the previous three weeks.

Filling out the forms is compulsory so State officials can check to see if people are voluntarily self-isolating for 14 days after their arrival into the country.

On Wednesday, the number of daily flights in and out of Dublin Airport doubled from earlier this week as Ryanair restarted 40 per cent of its flight schedule,

DAA, the airport’s operator, said about 3,200 passengers used the airport on Tuesday and 4,500 on Monday.

Paul Kelly, chief executive of Fáilte Ireland, will warn during an appearance at the Oireachtas Covid-19 committee on Thursday about the risks to tourism and hospitality businesses if the country is not opened to overseas tourists.

“Businesses are now carrying a very high level of unplanned debt accumulated over the last four months which will make survival extremely challenging if not addressed,” Mr Kelly will say in his opening statement.

In addition to the lack of revenue from overseas visitors, the capacity restrictions from physical distancing measures and the “challenges to domestic demand created by health and economic concerns will depress revenue levels,” the tourist chief will say in his opening statement.

“Tourism was hit first, hit hardest and will take the longest to recover.”