No school refusal for children based on religion – State agency 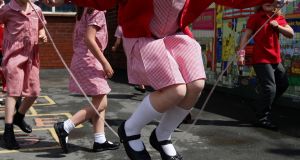 The recommendations are contained in the State body’s observations on the new Admissions to Schools Bill (2015). Photograph: PA

School admission laws should be changed to ensure no child is refused a school place on the basis of their religion, the State’s human rights advisory body has told the Government.

The Irish Human Rights and Equality Commission has recommended that existing laws be changed in order to eliminate discrimination in school admissions against children of minority faiths or no faith.

The recommendations are contained in the State body’s observations on the new Admissions to Schools Bill (2015), which is due to go before the Oireachtas shortly for debate. Some 96 per cent of primary schools are controlled by religious patrons, including 90 per cent by the Catholic Church.

It says jurisprudence regarding the European Convention on Human Rights, criticism by regional and international human rights bodies and a lack of diversity of schools for both minority faith and non-faith children underscores the need for change.

While the Constitution protects the right to denominational education, the commission says the new Bill could still comply with the provision by providing case-by-case exemptions – to be granted by the Minister for Education – where it is proved to be essential to maintaining the ethos of the school.

Minister for Education Jan O’Sullivan is to place the admissions Bill before the Oireachtas in the coming weeks.

Ms O’Sullivan has signalled support for setting aside 10 per cent of school places for the children of past pupils, down from a 25 per cent quota suggested by her predecessor, Ruairí Quinn.

The commission, however, recommends that such a rule should be prohibited on the basis that it could discriminate against families without historical ties to a school, as well as migrants and other minorities.Another recommendation is that schools ensure general religious classes – outside faith formation – should avoid “indoctrination”.

School gives land to other patron

Ireland’s oldest Catholic secondary school, St Kieran’s College Kilkenny, has provided a site to a non-denominational patron for two other schools in the city.

The site has been handed over by St Kieran’s to the Department of Education and Skills, which has granted funding for new buildings on the campus to accommodate 350 secondary pupils.

The two schools are Kilkenny Vocational School, which has been located on the St Kieran’s campus since 1979, and Coláiste Pobal Osraí established in 1991. Both are run by the Kilkenny and Carlow Education and Training Board.

The patron of St Kieran’s and Bishop of Ossory Séamus Freeman said that the move would “further guarantee a greater educational choice for parents and students in the surrounding area”.