Legislation removing baptism barrier to be discussed in Dáil this week 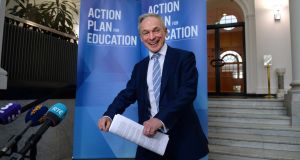 Minister for Education Richard Bruton is confident he has the support of the Catholic Church for the survey he launched on Monday which will seek the views of parents of pre-school children on what school patron they want in the future.

Parents will be asked whether they want multi-denominational patrons to take over the running of Catholic schools in 16 areas across the country.

“ This process is a real response to a process that hasn’t been moving as quickly as any of would have liked.”

About 90 per cent of the State’s 3,300 primary schools remain under the patronage of the Catholic Church. However, demand for non-denominational schools – such as those run by Educate Together – has been growing strongly in recent years.

As to whether a more radical Government policy on divestment of schools from church control was warranted following last Friday’s referendum, he said “the proportion of people expressing the Catholic faith is around 78 per cent so there are still a lot of parents who would like to see their children brought up in the Catholic tradition”.

He said “of course that dynamic is changing, that 78 per cent was much higher in the past; 95 per cent of schools are of a denominational dimension. So what we’re trying to do, without losing any of the strengths of our education s stem, is gradually evolve that to have more diversity, set a target of 400 [multi-denominational schools] by 2030 and that’s the target to which I’m working.

“We have to recognise that many Catholic schools have been very good at accommodating diversity - there are some very good models of it - but I think everyone recognises we need to move on.”

Speaking to The Irish Times on Sunday about the Catholic Church in Ireland in the context of the referendum result, Archbishop of Dublin Diarmuid Martin asked “is our system of working with young people working? Are our schools delivering for the investment we make in faith development?”

Mr Bruton said legislation that would prohibit the use of the baptism barrier for entry to Catholic schools “will be debated in the House this week”.

“I have introduced a proposal which I’m confident is robust. We’ve been through the Attorney General’s office and we are confident that it is robust and will result in the baptism barrier being removed from the vast majority of schools but retained where a child of a minority needs to gain access to a school of their ethos.

“I believe it’s important that we protect minority ethos schools in this way.”

Catholic bodies have argued that banning religion as a selection criterion in admissions would breach their constitutional rights relating to religious freedom and freedom of association.

A second round of town selections and surveys of pre-school parents will be organised when the outcomes of the initial round of pilot surveys have been assessed.

The surveys will be conducted by city and county childcare committees on behalf of local Education and Training Boards (ETBs).

This aspect of the plan has been criticised by Educate Together which pointed out that ETBs were not neutral observers.

“The ETBs act as patron for community national schools... Educate Together believes that this constitutes a clear conflict of interest which could invalidate the process,” Educate Together said in a statement.

Moreover, “the plan, as it has been outlined today, gives Catholic Bishops the final say in which schools they transfer and what type of new school will emerge.”