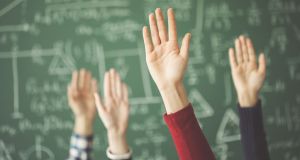 Minister for Education Joe McHugh announced on Friday that the State exams will not go ahead this summer for the first time in almost 100 years. Photograph: iStock

One of the country’s biggest teachers’ unions is calling for clear “safeguards” to prevent pressure being applied to teachers from parents over Leaving Cert calculated grades.

Minister for Education Joe McHugh announced on Friday that the State exams will not go ahead this summer for the first time in almost 100 years as a result of the Covid-19 pandemic.

Instead, students will have the option of receiving grades calculated by their teachers based on their school work or going on to sit written exams in late 2020 or early 2021, subject to public health advice.

Following the announcement, the Teachers’ Union of Ireland (TUI) has called for “safeguards to ensure that the professional integrity of teachers is protected” under the new system.

John MacGabhann, TUI general secretary, said guidelines were needed about what would constitute individuals, such as parents, attempting to compromise the process of calculating a student’s grades.

“There needs to be a clear sign that any form of pressure is simply inappropriate and won’t work,” he told The Irish Times.

This would include “benign” or “soft” efforts to influence teachers, and the Department of Education needed to clearly set out what would constitute parents “overstepping”, he said.

Guidelines on how the calculated grade system will work state that teachers “must not under any circumstances discuss with any student, or with the parents or guardians of any student, the estimated marks that the school is submitting”.

The guidelines state that allowing discussion would “interfere” with the process being carried out “properly and fairly”.

Following a meeting on Friday the TUI executive committee approved engaging with the calculated grades system.

In a statement, the union said students “have a right to advance to the next stage of their lives”, and needed a “mechanism” to allow them to do this without the traditional exams.

“Implementation of these measures on an emergency basis will not and cannot be regarded as a precedent or as agreement to operate such measures in future years,” the statement said.

The Association of Secondary Teachers Ireland (ASTI) executive body met on Friday evening and is continuing discussion of the plans on Saturday. Sources said that while there were deep reservations about the plans, there was also a recognition that there was no viable alternative.

School principals, meanwhile, said they were prepared to support the move given that there was no “perfect solution” to the situation, while students’ representatives said the move finally gave exam candidates much-needed clarity.

The Government is concerned over its exposure to legal action by students who may miss out on college places following the decision to replace the Leaving Cert with the system of calculated grades.

Mr McHugh has admitted there are “legal vulnerabilities” with the new plan, while the Attorney General is understood to have briefed Ministers on areas of concern in relation to it.

These are understood to relate to students’ legitimate expectations to be able to sit an exam, as well as their right to take up a college place after sitting the Leaving Cert.

Under the plan, students who undertake the written exams will not be able to take up their college places in the coming academic year and will have to wait until the following year.

Labour Party education spokesman Aodhán Ó Ríordáin has called on the Government to publish both the legal and public health advice behind the decision to cancel the previously scheduled written exams.

“There are several legal issues outstanding with the Government’s decision on the Leaving Certificate,” Mr Ó Ríordáin said on Saturday.

It was “unclear” if the calculated grade system would meet legal requirements, he said.

“Students need to be assured that their results of Leaving Cert 2020 will have exactly the same status as previous years,” he said.

Mr McHugh needed to publish the legal advice given to Government on the decision “so we can be absolutely assured that the legal criteria is indeed satisfied”, he said.

“I think it would be beneficial for the Government to publish the health advice they received on cancelling the exams. It will give schools a greater insight into how they can expect to open schools in late August as per the Government’s roadmap,” Mr Ó Ríordáin said.

How ‘calculated grades’ will work:

1. Teachers will be asked to provide a professional judgment of student’s likely Leaving Cert grades based on their work completed in school over the past three years.

2. The school principal will approve the estimated scores provided and the rankings of each student in each subject in the school.

3. A special unit is being established within the Department of Education to process the data provided by each school and operate “national standardisation” to ensure fairness among all students.

4. The Department of Education will finalise the grades for each student, which will be as close as possible to the traditional results date in mid-August. Formal State certification will also be provided.