Prose section all had been hoping for, Dís, on paper – and questions deemed fair 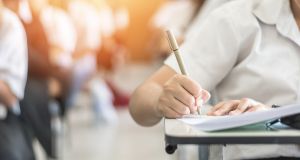 ‘The poem, An tEarrach Thiar, was also one the students like to study.’ File photograph: Getty

Higher level students who covered the entire course will have been happy with Irish paper two, according to teachers.

John Gavin of LeavingCertIrish.com said the majority of students would have been delighted with the paper, especially the literature questions.

“The prose section they had all been hoping for – Dís – came up, and the questions were fair,” he said.

“The poem, An tEarrach Thiar, was also one the students like to study, while the questions on An Triail and A Thig Ná Tit Orm gave lots of scope for students to write about what they like to study.”

Clare Grealy, an Irish teacher at the Institute of Education, said that students who did not cover all areas of the course may have struggled.

Emer McTernan, Studyclix.ie subject expert and an Irish teacher at Jesus and Mary Secondary School in Enniscrone, Co Sligo, said the paper was “fair and manageable” despite the fact that hotly tipped short story An Gnáthrud again failed to appear.

The ordinary-level paper was popular among candidates, said Ms McTernan. “Much of the poetry and prose content tipped among students – An Spailpín Fánach, Colscaradh, Hurlamaboc and Cáca Milis – came up. The phrasing of the questions were all fair and offered nothing out of the ordinary.

“Two reading comprehensions on Michael D Higgins and the Oireachtas were also very do-able. Well-prepared students will have left the exam hall happy and confident in their efforts.”

In the afternoon, almost 35,000 students sat the biology paper.

Luke Saunders, Studyclix.ie founder and a biology teacher at Jesus and Mary Secondary School Enniscrone, Co Sligo, said the “higher paper was at the easier end of the spectrum while the ordinary one was far more difficult than normal”.

Mr Saunders said a comparison of the new Junior Cycle common science paper and the Leaving Cert biology papers shows that a gulf has grown between the way we examine science at junior and senior levels.

“Yesterday’s Junior Cycle science paper was all about assessing scientific literacy and asking students to reflect on contemporary issues from a scientific viewpoint.

“Today’s Biology is much more in keeping with tradition in that it rewards students with the ability to recall huge amounts of factual information,” he said.

Mr Saunders said some students may have struggled with a question on the stages of mitosis, but most would have answered the “very straightforward question on human reproduction”.

“The experiment question would have posed no major difficulty. Overall I feel today’s paper would have been well received and offered plenty of choice to students who were well prepared,” he said.

The ordinary level paper also featured a set of questions on mitosis, but Mr Saunders said the quality of the images attached to the mitosis questions at both higher and ordinary levels were “really poor quality and unfair, and added unnecessary levels of confusion”.

Write notes on three of the following topics: (i) Vaccination. (ii) Antibiotic resistance in bacteria; (iii) The mechanism of phototropism or of geotropism in plants; (iv) Batch food processing; and  (v) The sounds created during the cardiac cycle.