Meet our Leaving Cert diarists: six students from Nagle Community College, Cork - Sarah, Ryan, Rebecca, Calvin, Aoife and Sean - will be sharing the ups and downs of the exams in a series of daily diaries. Video: Michael McSweeney/Provision 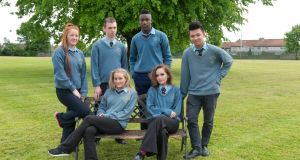 “I want to go to UCC.” That’s a common refrain from the class of 2016 at Nagle Community College, a co-educational post-primary school in Mahon on the outskirts of Cork city.

This is a designated disadvantaged school in a disadvantaged community, under the joint patronage of the local ETB and the Catholic diocese.

Not all the students aspire to top universities, says principal Ronan McCarthy, but they do all have aspirations to make a better life. Nobody says they want to go straight into work. Some want to go to UCC and some to Cork IT.

Many look to further education with a view to later entering a degree course; others look to apprenticeships. One wants to enter the Navy.

The school has a retention rate of 90 per cent, and there are 180 students, with 25 sitting the Leaving Cert this year. We’ll be following the progress of six of them over the first week of the exams.

“Our main aim is to get them to sit the Leaving Cert. Our students are able to go to college but not always ready: they’re moving from a scenario where they get huge support in school to being left to their own devices at college.”

Mr McCarthy says that the achievement of a student who works hard for 300 points in the exam is every bit as significant as a student who – with extensive family support, grinds, a family and community history and tradition of education, a strong diet and an expectation of college – gets 6 A1s.

Both Mr McCarthy and the school’s guidance counsellor Pam O’Leary say they have focused on mental health over the past few years, and teens are under more pressure than ever before, particularly with the growth of social media.

The school offers a range of extracurricular activities including soccer, GAA. athletics, golf, CoderDojo, robotics and Irish dancing. Despite some initial reservations, the chess club is popular.

It is a school in transition and one with close links to the UCC Plus access programme. This aims to ensure students are aware of the full range of opportunities through summer camps and college visits, as well as developing relationships with the parents and a range of tailored supports including providing the grinds that students from wealthier backgrounds take for granted.

To de-stress, she spends time with friends, listens to music and walks “the line”, a popular spot along the River Lee. She loves children and loves spending time with them. She has one older sister and two younger sisters

Dream job: To work abroad as a midwife, ideally in Canada

College choice: Nursing studies at the College of Commerce leading to the midwifery degree in UCC

When I get my Leaving Cert results I will... Try to be happy, and spend time with friends and family

Top study tip: Write lots of notes, keep reading until it stays in your head,

Biggest worry: Fear of not progressing from the College of Commerce into UCC

Most excited about: Travelling the world

Summing up Nagle: It’s welcoming and everyone gets on. I would like to see more focus on mental health

She is passionate about dancing, wants to be a professional dancer, and dances to de-stress, as well as going out with friends and listening to music. She has an older brother and an older sister.

College choice: Dance at Coláiste Stiofáin Naofa, leading to a degree course in Leicester in England

Guilty pleasure: Irish! I’m not that great at it but do love it

When I get my Leaving Cert results, I will... Go out with my friends

Top study tip: Never read the book, do the questions instead

Most excited about: Being a dance teacher and being my own boss

To relax, he practises mindfulness, plays computer games and takes part in soccer every Tuesday. He speaks Cantonese and a little Mandarin.

Guilty pleasure: Don’t have one

When I get my Leaving Cert results I will... Celebrate with family, go out with friends

Biggest worry: Homelessness and the economy

Most excited about: The opportunities the world has to offer, and how much there is to learn

Summing up Nagle: It’s a small school so we get on well with the teachers

Dream job: Chief executive of my own company, travelling the world

Guilty pleasure: Not guilty about any pleasures!

Most excited about: The possibilities of life

Summing up Nagle: The teachers really do care about your education and we all get along well

He is fluent in Irish and has one younger brother. To relax, he watches films, reads comic books, plays video games and, most of all, swims (“like a fish”, say his classmates). He is training to be a lifeguard.

When I get my Leaving Cert results, I will... Breathe a sigh of relief either way

Top study tip: Make a schedule and stick to it

Biggest worry: The state of the economy now and when I graduate

Most excited about: New technological breakthroughs

Summing up Nagle: It’s been like a second home and I will miss it a lot

Dream job: None yet, would love to try a range of different areas and have a taste of everything

Guilty pleasure: Keeping up with the Kardashians

When I get my Leaving Cert results, I will... Cry, whether they’re good or bad!

Biggest worry: The younger generation, from about 12, dress and act too grown-up. I was scared of teenagers when I was their age, but they don’t show any respect.

What excites me: Learning about crime

Summing up Nagle: Open, diverse, and a place where you can be yourself