Gaelscoileanna to provide faith classes for a variety of religions 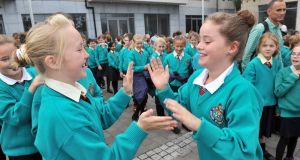 The largest patron body of Gaelscoileanna says it will establish a new model of school that allows for faith-formation classes for a variety of different religions during the school day.

An Foras Pátrúnachta, the patron of more than 70 Gaelscoileanna, hopes the new model of school will appeal to the Catholic Church, which is preparing to divest hundreds of its primary schools over the coming years.

Caoimhín Ó hEaghra, general secretary of An Foras Pátrúnachta, said the patron body has recognised the need for a multidenominational approach that also addressed the demands for faith formation within school time.

“As a patron whose primary goal is to provide Irish-medium education through the spiritual ethos sought by parents, we have now decided to provide this option when establishing Irish-medium schools, where a demand for such is established,” Mr Ó hEaghra said.

He said this model was similar to those of Community National Schools, a relatively new form of State-backed school under the patronage of Education and Training Boards (ETBs).

The Catholic Church has previously signalled its support for Community National Schools as they offer the opportunity for faith-formation classes during the school day.

It is likely that many Catholic primary schools will transfer to the patronage of Education and Training Boards, which run Community National Schools as part of a new “reconfiguration” – or divestment process – for religious schools.

Under this plan, Minister for Education Richard Bruton hopes to encourage religious organisations to transfer the patronage of more than 200 schools to multidenominational models.

Mr Ó hEaghra said that by also providing this model, the reconfiguration process will gain capacity to potentially establish Irish-medium schools in areas where currently there are none.

“Furthermore, this process could present current Irish-medium schools with the opportunity to transfer patronage to an Irish-medium patron body, using any of our range of ethos models, if they so wish,” he said.

Mr Ó hEaghra said its role as the “only patron body established solely for Irish-medium education” placed it in a unique position.

“We want to ensure that the parties in the process, who will be central to the decision on the choice of patronage model, are made fully aware of every option on offer,” he said.

“We have written to the Minister for Education asking him to include our offering to the communities and patrons who will be surveyed for their views as part of this [reconfiguration] process.”

A spokesman for An Foras Pátrúnachta also confirmed that it is in ongoing contact with representatives of the Catholic bishops to discuss its offer of providing this model under the reconfiguration process.

Research from the ESRI and elsewhere indicates that the average support from parents for Gaelscoileanna is about 25 per cent.

Mr Ó hEaghra said that about 500 or more Gaelscoileanna are needed to meet the real demand from parents.

“The 20-year strategy for the Irish language has the stated aim to grow the number of Irish speakers, and our schools can provide the solution to this. However, this can only happen with changes to current processes,” he said.