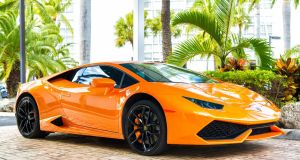 Students were asked about a text taken from An Lamborghini Buí, a novel by Iarla Mac Aodha Bhuí. Photograph: iStockphoto.

There were no surprises on the second Junior Certificate Irish exam of the day. Paper 2, which was described by teachers as “fair” and “student friendly” should have been manageable for any student who had prepared well.

The 90-minute paper was broken into three sections - Prós Liteartha (literary prose), Filíocht (poetry) and Litir (letter). Each section is worth 30 marks.

Robbie Cronin, a teacher at Marian College, Ballsbridge, said the paper was “quite student friendly”.

In section 1, students were asked about a text taken from An Lamborghini Buí, a novel by Iarla Mac Aodha Bhuí.

Candidates were asked to answer three questions from a selection of six. Teacher Noelle Moran of St Jarlaths College in Tuam, Co Galway, said students would have found the text “interesting and engaging”

“The questions would have been manageable as well,” she said.

In section two, students were presented with two poems they had not studied - Deireadh na Feide by hAilbhe Ní Ghearbhuigh and Breacsholas by Colette Nic Aodha.

The vocabulary in these “unseen” poems were of a high standard, but according to Ms Moran, students should have been able to answer the associated questions.

“I thought that was quite high standard. Students in general would find that quite a difficult question. Some 15 year-olds might not recognise the words ‘Natsaithe’ and ‘Giúdaithe,’” she said.

While the poetry was of a high standard, Ms Moran said the questions “should have been manageable” for the students.

“They wouldn’t have needed to understand everything in the vocabulary in the poem to manage their questions,” she said.

John Gavin from Leavingcertirish. com said “Both the Prós and the Filíocht sections were sufficiently challenging for all students, especially the choice of poems on the unseen section, but I think that the more capable and well prepared candidates should have handled the majority of the literature section pretty well.”

In section 3, students were asked to write a letter.

“The choice of letters was good,” said Mr Tobin. “The first was about a holiday abroad with the family, another was about a band winning a competition and the formal letter was to an editor about an article in the newspaper about dogs.”

Overall, the paper was described as generally fair.

“A lot of the vocabulary that we generally associate with higher level would be found on this paper and as a teacher I would be happy with that and I am sure the students would as well,” said Ms Moran.

“The letter options were quite varied but there was one standout option, Letter A, which was about going abroad on holidays with your family - this should have been the perfect choice for any student who was well prepared,” said Mr Gavin.