Trinity College Dublin has lost its status as Ireland’s only top-100 university, while six out of eight Irish top-ranked colleges have fallen down the rankings.

Senior academics say Government-imposed caps on staffing, growing student numbers and a decade of under-investment are to blame.

Universities such as UCD – which previously said it would consider capping the number of Irish students – are now considering new measures to tackle the rising student per lecturing staff ratio.

The QS World University Rankings show Trinity fell from 88th to 104th in the world, while UCD slid from 168th to 193rd place.

Ranking experts say the Irish sector is facing a range of challenges, with declines on key measures such as staff-student ratios, academic reputation and employer reputation. 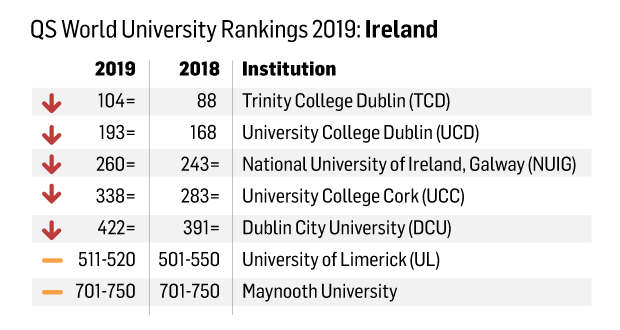 QS said that even though Irish universities have increased their research output, they have been outpaced by other universities across the globe.

The Irish Universities Association said it had serious concerns that a continued failure to address the third-level funding crisis will directly damage the Irish economy in future years.

Director-general Jim Miley said: “It’s time to stop delaying a decision on a proper funding model for Irish third-level education. The Government know what needs to be done and should now bite the bullet.”

Prof Andrew Deeks, UCD president, said a continuing deterioration in the student-staff ratio – which now stands at about 20 students per single faculty member – can no longer be endured.

“At a time when countries like China are investing billions into their best universities to reduce their student-teacher ratio to 10:1 and to raise their world standing, the Irish Government perseveres with austerity-level funding of Irish higher education,” Prof Deeks said.

“As a direct result, Irish parents continue to pay the highest up-front fees for undergraduate education in Europe, and the standing of the Irish university system continues to decline relative to more ambitious systems.”

A spokeswoman for Minister for Education Richard Bruton, however, said the Government has invested an additional €100 million into higher education this year compared to 2016.

In addition, a levy on employers - known as the National Training Levy - is due to increase between now and 2020, generating additional revenue for the education and training sector.

It was followed by US universities Stanford, Harvard, and California Institute of Technology.

University of Oxford (5th place) was the top-ranking UK institution, usurping its longtime rival, the University of Cambridge (6th).

Overall, both the US and UK have seen their performances stabilise, with slightly more improvements than drops.

Europe, in general, also stabilised its performance, with a fractionally higher number of rises than drops.

In Asia, Nanyang Technological University ranked highest (12th), while Tsinghua University is the first Chinese top-20 university in the QS rankings in more than a decade.

Malaysia is home to a top-100 university for the first time, after Universiti Malaya rose to 87th.


* This article was amended on 07/06/2018 to correct an error relating to the position of UCC in the QS rankings.

In a time of change, our schools need a new future learning model

Will CAO points rise even higher this year?

How many written Leaving Cert exams should my daughter opt for in June?

Can my son apply for a grant even if he doesn’t have a college offer yet?