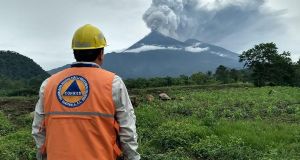 Volcano Fuego during an eruptive pulse in El Rodeo, Guatemala on June 3, 2018. Students were asked about volcano activity in the Junior Cert Geography exam. HO/AFP/Getty Images

There were no real surprises for Junior Cert students of ordinary and higher-level Geography with a good range of topics covered in Friday morning’s papers.

The higher-level exam did not deviate from the pattern of previous papers and teachers said students were presented with “well-balanced” questions.

Teacher Paul Concannon of St Mary’s College in Galway said the higher level paper was “fair” and featured a “good range of questions” .

“I think generally speaking it was a paper that students who had covered the topics on the course would have been happy with. I don’t think that there were too many things that would have caused any controversy,” he said.

The two-hour paper is broken into two sections and candidates are expected to answer 20 short questions in section 1. The second part of the exam requires students to answer three longer questions.

Students with an interest in current affairs would have benefited from the inclusion of topics related to the environment and world events and were asked about issues relating to migration, urban problems, global warming and volcanic activity.

“Students who had been keeping an eye on the news of the recent eruption of Guatemala’s Volcán de Fuego would have had an advantage on question 2B that asked for the name of an active volcano and to describe one positive and negative effect of volcanoes,” said Luke Saunders, Studyclix founder and teacher of Geography at JMSS Enniscrone.

“With traffic gridlock becoming an increasing problem in our cities students would have found question 4C particularly timely where they were asked to describe one reason why traffic congestion occurs and then to explain two methods to solve the problem.”

“Students who had familiarised themselves with the layout of past year’s exams would have found today’s paper very straightforward,” said Mr Saunders .

“The Ordnance Survey maps and aerial photograph question was a good test of students’ mapping and photographic skills,”said Mr Concannon.

“Of all the questions, that probed a bit more at the better students’ skill of interpreting aerial photographs and maps. I thought it was a good set of questions that would have tested those skills.”

“I thought over all it was a fair paper. It would have suited a lot of students. A lot of them will be happy,” Mr Concannon added.

The Ordinary Level Geography paper would also have been suited to students who had prepared well for the exam.

“The question format was in line with previous years,” said Mr Concannon.

“‘Student friendly’ would be a label I would put on it.”

“There was number of questions that would have tested the students’ sketching skills. I think it was a fair paper that should not have caused any undue stress in students at that level,” he added.

“Today’s ordinary level paper opened with three questions to be answered using evidence from a map of Sligo. Ordinary level students would have been very comfortable drawing a sketch map, outlining the reasons why people would holiday in the area and giving some examples of historic settlement.”

“The ordinary level had paper had several questions which had appeared regularly over previous years. A well prepared ordinary level student would have found plenty of familiar content in this morning’s paper,” said Mr Saunders.

Circle the correct answer in each of the following statements.

(i) Humidity is measured using an instrument called a hygrometer / an anemometer.