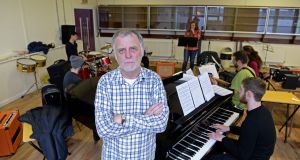 The word “jazz” may conjure up images of men in sharp suits playing swing music in smoky basements.

For contemporary jazz musicians, it’s a tired stereotype more than half a century out of date.

To see what jazz means in the 21st century, take a look at the graduates coming out of Newpark Music Centre’s respected jazz programme.

The transfer of the programme to DCU from next September means it will be the first time a university has offered a BA in jazz and contemporary music performance, marking a new era for the art form in Ireland.

It might be considered a niche qualification by some, but jazz education is increasingly seen as a model through which performing musicians of all styles and disciplines can learn their craft.

“As a training mechanism for young musicians, jazz is incredibly comprehensive,” says Ronan Guilfoyle, a director of the jazz department at Newpark.

“You have to develop your technique, you learn to have a good sense of harmony and great ears, you study composition, you study arranging, and by virtue of playing jazz as it is today, you study so many different styles and genres.”

He says graduates are flexible – and employable – because of the range of skills they have acquired.

Newpark began training jazz musicians back in the mid-1980s when bassist Ronan Guilfoyle and a small group of his fellow musicians began offering a single, once-a-week class in improvisation.

Since then, the jazz department at the school has grown steadily and today Newpark has a student body of about 100 students, half of them from outside Ireland, all studying for the school’s internationally recognised degree in jazz performance.

Along the way, Newpark has assembled a faculty of professional musicians and forged strong links with other jazz schools around the world, most notably the prestigious Berklee College of Music in Boston.

As well as its BA in jazz performance, Newpark offers the so-called “Berklee track”, meaning that students can begin their training in Dublin and – if they have the results and the funds – transfer to Boston to finish their degree.

Last year, DCU incorporated the music courses offered at St Patrick’s, Drumcondra, and the Mater Dei Institute into the university’s curriculum, so the university already offers a Bachelor of Arts (joint honours) with music, and a Bachelor of religious education and music.

For DCU president Brian MacCraith, the arrival of Newpark’s talented faculty represents an opportunity to broaden the university’s music offering.

“We weren’t interested in just replicating what was on offer in other universities,” says Professor MacCraith.

“DCU would have a well-justified reputation for being innovative, and trying new ideas, and I think this move fits in with that.”

MacCraith also sees great potential in the intersection between music and technology.

“A broader strategic interest is what people are calling Stem – science, technology, engineering and maths – and to start fusing that with the creative arts. There’s some really exciting possibilities there, and the university would be particularly well positioned to do that.”

For many of those taking the course, becoming a jazz musician is the last thing on their minds.

For Rachel Hynes, a second-year piano student at Newpark, the move to DCU offers new opportunities for students.

“There’ll be more facilities and more possibilities for grants, so I think it will be easier for people to do the course, because they’ll be able to go through CAO, and they’ll be eligible for more financial supports.”

“One really nice thing about moving,” she adds, “is we’ll be able to access the facilities in DCU, so there will be more possibility for clubs and societies and that kind of campus life.”

Jason Camelio, director of international programmes at Berklee, is enthusiastic about the potential offered by the move to a university.

“For us,” he says, “the thing that worked about Newpark was their approach, not only to teaching the curriculum, but the music community that they sought to build.

“It’s a group of high-level artists who are engaged in the industry, bringing their expertise to the classroom.

“The thing that’s happening now, they’re getting the opportunity to grow and expand with an organisation that can provide them the kind of support to add more great teachers to their programme, to grow their enrolment and give them the space to do that, so they’re going to be able to do some incredible things in the next few years.”

The career opportunities for well-trained musicians in today’s music industry go beyond performance or composition.

The offering at Berklee, for instance, includes undergraduate degrees in film scoring, electronic production, sound design, music business management and songwriting, as well as the core disciplines of jazz performance and composition.

So whether you want to compose for film, television and video games, record and produce music across a whole range of genres, play drums in Beyoncé’s band, or yes, even play swing music in a (smoke-free) basement, a jazz education is increasingly seen as a good place to start.

* Applications for DCU’s new BA in jazz and contemporary music must be made through the CAO before February 1st, with auditions held in March and April

Music degrees: You were in a band at school, but can’t stomach the classics. Considered a course in modern music?

Despite widely held assumptions that rock stars have no time for formal education, a surprising number of musicians found fame by keeping their heads down, studying hard and listening to their tutors. Here’s a list of some of the growing array of non-classical music courses in Ireland:

* As well as the established Bachelor in music degrees available at Trinity, UCD, University of Ulster and elsewhere, there are increasing opportunities to study music-related disciplines at third-level in Ireland.

* Many of the institutes of technology – including those at Dublin, Waterford and Cork – offer degrees in music-related disciplines, including production, sound engineering and music technology. For instance, the Cork School of Music at CIT offers a BA (Hons) in Popular Music. More at csm.cit.ie

* The Irish World Academy of Music and Dance at University of Limerick offers a BA in performing arts in Irish traditional music, voice, and world music. More at: ul.ie

* Bimm Dublin, part of the European Bimm network of schools, offers a BA (Hons) in commercial modern music at their school in Dublin’s Liberties, with partner schools in London, Berlin and elsewhere. More at: bimm.ie

* Alongside its traditional BMus, Maynooth University offers a BA in music technologies, as well as postgraduate courses in technology, composition and musicology. More at: maynoothuniversity.ie