‘I can’t see myself moving home...there’s not much left there’

Carl O’Brien meets six DCU students from various parts of rural Ireland and asks them what would it take to get them to move home after college. Video: Bryan O'Brien 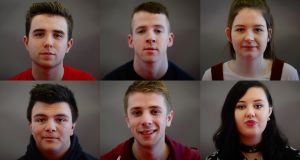 What would it take to make you move back home? Many third-level students from regional communities who attend Dublin City University say they would love to make a living close to family and friends. But few see any credible chance of making a living in the towns and villages where they grew up.

Feel-good Government policy pledges to revitalise the regions brush up against very real barriers such as a lack of jobs, limited broadband and poor public transport.

Brian Mulry, who is studying international business, is from Kilconnell, a few miles outside Ballinasloe, Co Galway. He says his home town is suffering from derelict shops and a poverty of opportunity.

“There were 60 in my [Leaving Cert] year. I’d say about 10 of them will still be in Ballinasloe in 10 to 15 years’ time. It’s a dying town. There used to be a lot of factories and industry. There’s not much left now. Every couple of months we see another shop closed down.”

Given the option he would return home – though it seems a very distant prospect. “I miss the family, but I’m nearly better off up here or in another country than I am back home.”

Emilio Williams-Doran from Strandhill, Co Sligo, is a first-year student studying engineering. He would move back home if work was available. “It’s really disappointing that all of my serious job prospects are either in Dublin or Europe or America.”

Thin on the ground

“A lot of us are looking towards the States and what we can do over there,” says the third-year communications student.

She has never seen a media job advertised in her home county. “A lot of my friends have already moved over [to the US] and started jobs in media companies. They can’t really return home.”

Simple things like a lamentable bus service means she can travel abroad faster than embarking on a journey to Buncrana. “I would move back home if there was better transport for myself. At the moment if I have to go back home it takes me about five hours on a bus,”

Brian Farrell from Roscommon town knows the feeling. He is studying global business at DCU.

He says he would also move back home if there was a realistic prospect of job opportunities close to home.

While technology is often heralded as opening up the prospect of working from home, students say there are practical barriers.

“I’d move back home if there was better network and internet coverage in Co Wicklow. The max you’d get in Dunlavin on a good day is probably 2G or 3G.”

Carmel Kenny, who is studying communications, would also like to return home to her home village of Rochfortbridge, Co Westmeath.

The village streets are free of choking traffic thanks to a motorway and she feels the right policies could breathe new life into it. Instead it is struggling like many others. “You have the two shops, your post office, your pub and that’s it.”

Williams-Doran point out that his home village has more opportunities than most in rural Ireland. Surfing has given it a new lease of life during the tourist season, but job prospects depend on having a full-time population to support wider services.

Reversing this, he says, requires a long-term commitment to provide jobs. There are some tentative green shoots. “I was reading recently about a big new business development near the Garavogue River. It was great to see that – it was the first in a long while.

“At the end of the day I’d rather not leave home – it’s where I grew up and it’s where a lot of my friends are. I feel like if I ever want to do well in my career I have to leave home. So, I guess, you just kind of get used to the idea of having to move.”