Department warns union failure to co-operate may result in loss of €1,000 pay increase 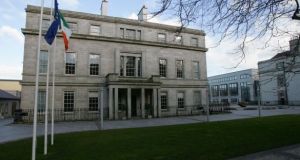 The Department of Education: its spokesman said the pay rise is available to those who are parties to the Lansdowne Road agreement. Photograph: Bryan O’Brien

Thousands of secondary school teachers may lose a €1,000 pay increase due to public servants if they reject new settlement proposals.

The 18,000 members of the Association of Secondary Teachers Ireland (ASTI) are currently voting on proposals aimed at resolving a series of disputes between the union and the Department of Education.

A €1,000 salary increase is being brought forward from September to April for 250,000 public servants.

While there have been conflicting signals about whether ASTI members would be entitled to the payment, the department has confirmed that a rejecting would lead to the “delay or loss” of this pay increase.

“The pay increase from April to August for public servants which was announced last week is available to those who are parties to the Lansdowne Road agreement,” a department spokesman said.

“The financial and other consequences for ASTI members of failure to co-operate with the terms of the public service stability agreement were formally notified to ASTI in June 2016.”

The spokesman said the union’s leadership was warned at the time that in the event of continuing failure to co-operate in the medium term, “further additional measures may also ensue”.

“Should ASTI continue to fail to co-operate with the agreement, delay or loss of the pay increase of €1,000 due on September 1st, 2017, may also ensue,” the spokesman said.

The Department of Public Expenditure and Reform indicated last year that all public servants would receive the payment regardless of whether they were in compliance with the terms of the Lansdowne Road agreement.

This, it said, was because the payment was provided for by primary legislation (Fempi Act 2015) rather than under the agreement itself.

Meanwhile, ballot papers are being sent out to the union’s 18,000 members, including about 1,300 retired members.

The issue of whether retired members have a vote was a source of debate at the union’s central executive committee meeting last week.

While union officials argued that retired members were not entitled to vote on the settlement proposals, the union’s president is understood to have argued in favour of extending the vote on the basis that it affected pensions.

The ASTI’s leadership has recommended a No vote to the settlement proposals.