Trinity seeks to recover €1.7m in fees from undercharged students

University says oversight led to issue affecting students and graduates, with some owing €9,000 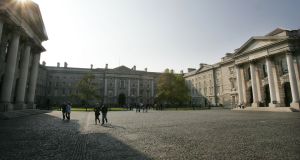 The issue arose in cases where Susi later informed students they had not been approved for grants, but Trinity still charged them reduced fees.Photograph: Alan Betson

An administrative oversight led to Trinity College Dublin undercharging students €1.7 million in university fees, which the college is now looking to recover.

In total 509 students were undercharged registration fees over the past three years, with some students and recent graduates now owing the university as much as €9,000.

The oversight affects students who applied for a Student Universal Support Ireland (Susi) grant, were not approved for the grant, but were mistakenly charged lower fees by Trinity as if they had been successful.

The State grant is available to students from lower income households, and covers the annual €3,000 student contribution fee in part, or in full.

Responding to questions from The Irish Times, a spokesman for Trinity said: “For the past three years, the college has mistakenly believed it was owed money by Susi. In fact, the money was owed by individual students.”

“If a student believes that they will get a grant, they can enter college or progress to the following year by noting that they have applied for the grant,” the spokesman said.

The issue arose in cases where Susi later informed students they had not been approved for grants, but Trinity still charged them reduced fees.

Last December Trinity sought payments from Susi they incorrectly believed the authority was covering, and was informed it was in fact students who owed the university the money.

The problem had been allowed to develop as Trinity had not reconciled their records with Susi’s database of students who had been approved for grants, university sources said.

The university has now written to more than 500 affected current and past students, seeking to recoup unpaid fees.

Students would have received correspondence from Susi informing them they had not been approved for grants, and around 650 students informed Trinity of this, and were charged and paid the correct fees, university sources said.

In other cases where students now owe Trinity fees, around 80 per cent of individuals owe €3,000 or less, a spokesman for the university said. However, a “small number” of both current students and recent graduates owe as much as €9,000 in fees, the spokesman said.

Some 220 of those who owe the university fees are current students, while the other 289 individuals have graduated from Trinity in recent years.

“We recognise that this will cause difficulties for some students but in the interests of fairness to the vast majority of students who pay their fees on time and in full, the university will be pursuing unpaid fees in the normal way,” the spokesman said.

Trinity has set up an interest-free repayment plan, and in most cases students and alumni will be given two years to pay off the debt.

In a statement, Susi said a “fee validation process” to inform colleges which students had been awarded grants takes place throughout the academic year.

Shane De Rís, Trinity College Dublin students’ union president, said the issue had exposed a communication “flaw” between Susi and colleges. However, he said “the college should have copped this earlier and flagged it.”

The students’ union had been assured students would not be “disadvantaged” over the administrative oversight, and that no one would be expected to “pay up in full tomorrow,” he said.

Normally if a student has outstanding unpaid fees they will not be allowed to access their exam results or graduate until the balance is paid. In the case of the 220 current students this will only apply if they refuse to sign up to a repayment plan with the college.