Irish workers are most ‘overqualified’ in Europe 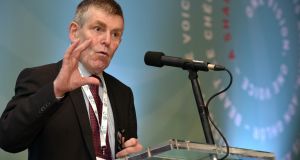 Irish workers are the most overqualified in the European Union for the jobs they are working, according to latest research.

About one in three workers are at least one educational level above the international norm for the jobs they are in.

This is the highest rate in the EU and almost twice the level of countries such as France, Sweden and Finland.

The findings, based on research carried out by the Economic and Social Research Institute (ESRI) between 2000 and 2011, are likely to spark a debate over whether we are sending too many students to third-level.

Ireland has one of the highest proportions of young people in Europe progressing on to higher education, with about 60 per cent of all school-leavers attending universities or institutes of technology

This figure is projected to increase to 70 per cent over the next decade or so, according to some projections.

Some educationalists have claimed that a “snob value” among parents over higher education means that students who might flourish in apprenticeships are being shoe-horned into college.

By contrast, countries such as Germany have much lower rates of school-leavers progressing to university, with many opting for traineeships and apprenticeships which have much higher status than at home.

Tony Fahey, professor emeritus at UCD, who quoted the figures in a presentation to the annual conference of Education and Training Boards Ireland on Thursday, said they highlighted the challenge of matching education levels to skills needs.

However, he said the issue was complex in that people who may be labelled as overeducated for their current role may yet benefit in the future.

“We see it every day. It can mean bar tenders who have university degrees. It comes to matching educational output to the skills demands of the economy,” Mr Fahey said.

“However, it’s quite a complicated story as it could mean that those people could benefit from their education at some time in the future.”

There has been a dramatic fall-off in the numbers taking part in apprenticeships or training, a pattern which coincided with the economic downturn.

There are ambitious Government plans to increase numbers taking up further education options over the coming decade, with a series of “white collar” apprenticeships launched recently in areas such as insurance and financial services.

Prof Fahey also said the scale of the young population in Ireland poses a challenge for families struggling with education costs. He said family sizes remain surprisingly high compared to countries across the developed world.

About one-third of families in Ireland have four or more children.

This means many families face a heavy burden when it comes to education-related expenditure. This helped to justify significant public expenditure in the area, Prof Fahey said.