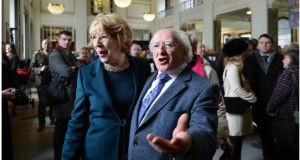 Irish third-level institutions are “intimately engaged with regimes that have human rights’ questions to answer”, the former head of the Bahrain campus of the Royal College of Surgeons in Ireland (RCSI) has said.

Addressing a conference on ethics in education, Prof Tom Collins said that, while the RCSI has been the focus of much public scrutiny, other universities had questions to answer about their relationship with non-democratic countries.

He noted that in 2009 China and Malaysia, two countries which were criticised in various Amnesty International reports, provided 31 per cent of non-EU students to Irish third-level institutions. This was worth €61 million to the sector, and was much sought-after funding as it was one of the few income streams universities had discretion over.

“The NUI [National University of Ireland] is silent on that issue and I don’t think it can be silent,” he said.

“It can be difficult to reconcile being a critic with being an enterprise. It’s difficult to envisage a Chelsea footballer wondering about Roman Abramovich’s human rights’ record,” he said.

Prof Collins, who resigned his post in Bahrain earlier this year over the cancellation of a conference on medical ethics, reiterated his support for the RCSI to remain in the country.

Little impact
“Withdrawing would have little impact on anyone other than the college, its students and staff,” he said. Ireland had “moral authority but no muscle” to bring about change in the region but it could build alliances. “The only way now is for western institutions to coalesce around a shared commitment to democracy.”

Among those attending the Royal Irish Academy conference Values in University Education: from Academic Freedom to Impact was President Michael D Higgins, who shared some concern about the direction Irish universities were taking.

Referring to a “flaw” in the system, the President said: “Rather like the siege of Troy if you let the Trojan horse of the business model come in and if it, in fact, stifles creativity in relation to the management of staff in creative settings you are already really defending your city after you have lost it.”

As a former minister, he had encountered people both at a senior level in government and in the university sector becoming “seduced” at times by “the magic in the business model,” he added. “Then, as the magic of the business model turns to ashes all around them everybody foosters and flusters and suggest perhaps out there, in the ether, is a technology that will save us all. I actually think we need more philosophy.”

Earlier, Trinity College Dublin’s provost, Prof Patrick Prendergast, said universities were “up against a very sophisticated Government” in terms of communications, and they needed to convince the public of the value of academic freedom.

“Government control of universities, though it might seem like the right thing to do, is self-defeating,” he said.

Contrary to some perceptions, Thomas Estermann of the European University Association told the seminar Ireland ranked sixth-highest in Europe for organisational autonomy and highest for academic authority. However, he said this ranking may have slipped somewhat with the introduction of the Universities (Amendment) Bill 2012.