Interesting bores: the maths behind riding a wave upriver

That’s maths: Tidal bores, formed by sudden jumps in water surface level, are popular with surfers, who ride them upriver for miles 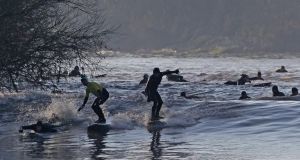 Surfers on the Severn Bore, a natural tidal phenomenon that pushes a 4ft wave up the Severn Estuary in Gloucestershire. Photograph: Matt Cardy/Getty Images

According to the old adage, water finds its own level, but this is true only for still water. In more dynamic situations where the water is moving rapidly, there can be sudden jumps in the surface level. When water at high speed surges into a zone of slower flow, an abrupt change of depth, called a hydraulic jump, may occur. Hydraulic jumps are found in some river estuaries, below dams and weirs and even in the kitchen sink.

When the tide floods into a funnel- shaped river estuary, it can form a wall of water a metre high called a tidal bore that travels rapidly upstream. The Severn bore occurs several times a year, under suitable conditions of spring tide.

Tidal bores are popular with intrepid surfers, who ride them upriver for miles, but there are also stationary hydraulic jumps, found at the spillway of a dam or below a weir. These have recirculating water that traps flotsam and they provide entertainment for kayakers prepared to risk being caught in the back-flow.

A simple mathematical analysis yields information on the height of a hydraulic jump. An early study was carried out by Jean-Baptiste Bélanger (1790-1874), a French engineer, who derived an expression for the difference in height by means of conservation principles. Gustave Eiffel was one of his students, and Bélanger’s name is inscribed on the Eiffel Tower.

It might seem reasonable to apply the principle of conservation of energy to the analysis, but energy is dissipated at the hydraulic jump, so the conservation principle does not hold. This dissipation is exploited by engineers who design spillways to generate bores that remove destructive energy.

Bélanger originally used energy conservation, obtaining the wrong answer. He later corrected his analysis, applying the fundamental physical principles of mass and momentum conservation across the jump to obtain what we now call Bélanger’s Equation, giving the ratio of water depths upstream and downstream.

You do not have to leave home to observe hydraulic jumps; they can be seen in the kitchen sink. When the water from the tap hits the sink pan, it flows radially and rapidly outwards in a thin layer until it slows to a critical speed where a circular hydraulic jump forms.

The sink bore is effectively a “white hole”. Recall that in a black hole the gravitational attraction is so intense that light waves cannot escape, or pass out of the hole; a white hole has the opposite property: waves cannot enter the region within the jump.

Surface waves travel more slowly in shallow water than in deep water. In the shallow inner region of the sink bore, the flow is more rapid than the wave speed. Surface waves are swept outwards by the flow and cannot propagate against it. Consequently, waves outside the hole cannot penetrate the inner region. They are trapped outside, just as light is trapped inside a black hole. The water decelerates across the jump, where the flow speed and wave speed are equal and the depth increases by an order of magnitude. The jump is normally stationary but by turning the tap you can change the radius of the sink bore.

Hydraulic jumps continue to provide opportunities for engineers, sport for surfers and challenges for physicists and applied mathematicians. Who would have thought that bores could be so interesting?

Peter Lynch is professor of meteorology at University College Dublin. He blogs at thatsmaths.com. His book Rambling Round Ireland is now available as an ebook from amazon.co.uk