How this project was compiled 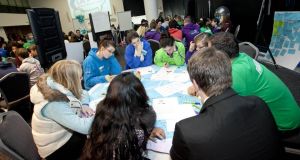 This extensive investigation into Relationships and Sexuality Education in Irish schools was made possible by the support of the Mary Raftery Journalism Fund. It was written by Peter McGuire and Louise Holden was consultant.

Research began with an extensive analysis of the academic literature and policy documents on the topic, which includes but is not limited to a 2007 report by researchers from the Children’s Research Centre at Trinity College, a 2010 study by UNICEF Ireland on adolescent experiences of sexual health and behaviour in Ireland and, perhaps most crucially, the 2010 Dáil na nÓg report Life Skills Matter: Not Just Points, which was compiled and written by young people themselves.

Student views
At all stages of the research, and in keeping with the spirit of the Mary Raftery Journalism Fund, the key focus remained on the actual experiences of young people through their own eyes, as opposed to how their experience is interpreted by parents, teachers, or organisations.

As part of the research, we canvassed the views of 14 current students, as well as six people under the age of 25, about their experiences of relationships and sexuality education.

The people under the age of 25 included two student union representatives, three people who had provided information for the website SpunOut.ie, and one person sourced through social media.

Prominent anti-abortion organisations including Life Pregnancy Care and Youth Defence were asked to suggest young people to contribute opinions, but this offer was not taken up.

The Department of Education and Skills
Circulars and guidelines from the Department of Education and Skills also informed this research, particularly Circular 0023/2010, which advised schools to only use external agencies for RSE with caution, and Circular 0037/2010, which reminded schools of their obligations as regards RSE. The SPHE Subject Inspection Report, published last November, also informed this work, while each of the 63 inspection reports that formed the data set for the DES’s overall inspection report were individually examined.

Freedom of Information
The Irish Times submitted three Freedom of Information request to the DES. One of these requested information on complaints made to the DES or any organisation under its aegis about whether there was any follow-up or sanction on schools which had breached its guidelines on cautious use of external agencies in the RSE and SPHE programmes. The DES conducted a thorough search and found that it had not followed up on or sanctioned any schools that had breached its guidelines.

The second request asked if any complaints had been made to the DES about the activities of any external agencies in schools, including but not limited to the Irish Family Planning Association, Youth Defence, CURA, and Belong2; the request referenced many other agencies. The DES said it had received no complaints.

According to the SPHE Inspection Report, the DES inspectors found, “In many school reports, inspectors recommended that schools adopt procedures on the use of external facilitators that are in keeping with Department Circular 0023/2010 Social, Personal and Health Education (SPHE) & Relationships and Sexuality Education: Best Practice Guidelines for Post Primary Schools.”

The third request asked the DES if it could identify the name and location of the schools which had used external facilitators, and which agencies they were. In response, the DES said “the Inspectorate did not collect detailed information about the content of RSE sessions presented in schools by external facilitators. Furthermore, the Inspectorate did not directly seek the names of external facilitators. Therefore, your request is refused under section 10 (1) (a) of the Freedom of Information Act, 1997 & 2003, which provides that a request may be refused if the record concerned does not exist.”

School survey
Just 11 out of over 40 schools contacted – including 38 who formed the data set of the SPHE Inspection report - were willing to provide information on their RSE programme. Due to the low response rate from schools, the information provided is of little value as it is difficult to make baseline comparisons.

Interviews
In no particular order of importance, representatives from the following organisations were interviewed for this series: The Teachers’ Union of Ireland, the Association of Secondary Teachers Ireland, the Irish National Teachers’ Organisation, the Joint Managerial Body, the Health Service Executive, Here2Help, the Department of Education and Skills, the Irish Family Planning Association, the Dublin Rape Crisis Centre, Choice Ireland, Atheist Ireland, the Children’s Research Centre (Trinity College), the Union of Students in Ireland, Belong2, the Irish Secondary School Union, SpunOut.ie, the Ombudsman for Children, Bodywhys, Life Pregnancy Care, Youth Defence, ShoutOut, Young Social Innovators, Love for Life, CURA, Accord, and the Cork Sexual Health Centre. A number of politicians were approached, including Senator Ronan Mullen and Aodhan O’Riordan of the Labour Party. At least three individual SPHE and/ or CSPE (Civic, Social, Personal Education) teachers were also consulted.

Family & Life did not respond to any requests for interviews. Pure in Heart were unable to contribute to this article, which was written and researched around the time of the tragic death of Tom O’Gorman, who worked for the Iona Institute. The Iona Institute shared a building with Pure in Heart. However, Pure in Heart had previously spoken to other media outlets; most notably, they were interviewed for a feature in The Sunday Times on December 8th, 2012.