Graduates would pay €25 a week in 15-year loan scheme 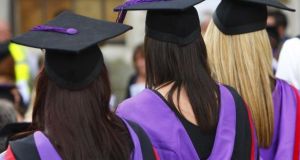 Under the proposed system graduates would begin to repay tuition fees once their income reached a minimum level. Photograph: PA

College graduates could face loan repayments in the region of €25 a week over a 15-year period under major reforms to third-level funding proposed in a Government-commissioned report.

A draft report recommends the introduction of a new income-contingent loan system for graduates, increased maintenance grants for students from low income families and a greater contribution from both the State and employers.

The findings are contained in a confidential 70-page draft report entitled Funding Irish Higher Education: A Virtuous Circle of Investment, Quality and Verification.

Under this system, college would be free at the point of access and graduates would begin to pay back tuition fees once their income reaches a minimum level.

The expert group recommends that interest should be charged on State-backed student loans at a rate lower than the cost of commercial borrowing, allowing for “very affordable” repayments.

The report does not make a final recommendation on the cost required of graduates on the basis that further analysis is required.

However, these figures would vary depending on students’ future income levels.

Importantly, those who earn below a certain amount – because they are in low salary employment or life stages which limit their access to work – would pay back nothing until their circumstances change. Wealthier students would be able to pay back their tuition costs up-front.

The income-contingent loan system would apply to undergraduate tuition fees, plus one year for changes in circumstances.

It would also be available for part-time tuition fees, taught post-graduate tuition and private sector tuition .

The report estimates that deferred payment, along with extra funding from the State and employers, could yield more than an extra €1 billion for the third-level sector.

It also recommends higher maintenance grants which reflect the cost of living, and a means-test which takes account of capital assets.

For employers, it says the a national training levy should be increased given benefits they derive from the higher education system.

After seven years of spending cuts, hikes in student fees, tumbling numbers of academic staff and rising student numbers, it says the sector is under pressure as never before.

The report also warns there are no “easy fixes or escapes from the funding reform problem”. If the status quo remains, it says there is a danger of a “vicious circle” of falling funding, combined with increased class sizes and reductions in the quality of tuition.

The report says a return to gradual increases in State funding will not be sufficient to create the kind of high quality third-level education system the country requires.

The Government is due to receive a copy of the draft report shortly, though it is likely to fall to the next administration to decide whether to implement its findings given the imminent general election.