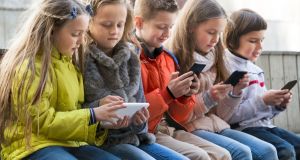 “The simple truth is that if we allow our children to use smart phone technology, we abdicate our responsibility to keep them safe from harm.” Photograph: Getty Images

Tom Bennett, a teacher and behavioural expert appointed by the British government in 2015 to help tackle unruly behaviour in schools.

Legislation being prepared by Jim Daly, chairman of the Oireachtas Committee on Children and Youth Affairs, will be ready within weeks

Proposed measures to fine parents and retailers if they allow children unrestricted access to the internet are intrusive, he said.

Legislation being prepared by Jim Daly, chairman of the Oireachtas Committee on Children and Youth Affairs, will be ready within weeks.

Mr Daly is drafting legislation which would mean parents being fined for allowing their children to own mobile phones with unrestricted access to the internet.

It would also mean retailers would face fines if they sold such devices to children under the age of 14, he said.

“It represents an unnecessary intrusion of the State into a private duty and concern. Would we criminalise allowing a child into a library, or a newsagents, where erotica and violent fiction might be available? No, although we might sanction a parent who demonstrably and repeatedly facilitated a child’s unfiltered access to such materials. Until that has been demonstrated, the State arguably has no right to prescribe. Such legislation would represent a substantial expansion of the Government’s role in family life,” Mr Bennet told the Irish Times.

In this way we protect them and scaffold their maturation into young adulthood, neither suffocating nor abandoning them

Mr Bennett said a more nuanced approach to teenagers and mobile phone use is needed.

“The solution, as with any question of child protection, includes age-appropriate supervision: close at first, and becomingly increasingly trusting as trust and good habits are earned and demonstrated. In this way we protect them and scaffold their maturation into young adulthood, neither suffocating nor abandoning them,” he said.

Mr Bennett said he agreed that children should not have unmonitored access to the internet and exposing children to material that is age-inappropriate is a danger.

“With no restrictions on usage, children, naturally inquisitive, will go where their curiosity takes them. But it is obvious that this exposes them to pornography, horror, racism, falsehoods and active predators as well as the wealth of opportunities it can bring. No sensible parent should allow their child unmonitored access to the internet, or should feel themselves to be properly executing their duty of care by eschewing its supervision.

He said schools have a role to play with parents in helping to regulate mobile phone or internet use.

The simple truth is that if we allow our children to use smart phone technology, we abdicate our responsibility to keep them safe from harm

“Schools and parents both have extremely important parts to play in this matter. The simple truth is that if we allow our children to use smart phone technology, we abdicate our responsibility to keep them safe from harm, and this must be discouraged with rigour,” he said.

“Schools can play their parts too, by providing safe spaces within their premises where children no longer feel the pressure to be constantly online and available for social contact; where they can be taught useful habits of self regulation and self prohibition. Where they can learn, in other words, when to be online and when not to be,” he said.