Fighting Words partnership aims to harness creativity in the classroom 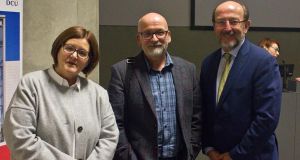 A new partnership between Fighting Words and Dublin City University’s institute of education aims to help ensure children’s creativity is not stifled by the pressure of exams and assessments.

Founded by Roddy Doyle and Seán Love in 2009, Fighting Words - whose tag line is “the write to right” - has been using the power of storytelling to help children become successful shapers of their own lives.

Their job will be to work within DCU - one of the biggest teacher-training settings in the State - to engage with staff in integrating creative methodologies across its curriculum for trainee teachers.

Speaking at the launch of the partnership at the St Patrick’s Campus in Drumcondra, Doyle himself said the partnership has surpassed his hopes for what Fighting Words can do for communities.

“It’s like the previous nine years has been preparation for what’s happening now,” he says.

“But I am personally very keen that children have access to open-creativity that’s not corralled by examinations or assessments.”

“Fighting Words is the adventure of creating stories with words in a way that is as inviting as possible, so that kids aren’t bound by rules too early and can make their own discoveries.

“When you ask a child what makes a good story, they might say ‘full stops’ or ‘conflict and resolution’. But all that means is a child thinks ‘rules’ make up a story; things that must be done.”

When children think of rules, instead of possibilities, that is when creativity can be stifled, Doyle says.

At Fighting Words, he says, there has only ever been one rule: the characters must be original.

Its workshop at primary level starts with a group activity in front of a big projector, where the children write an original story which they see typed up on screen.

The class decides on everything from characters and plots, sentence by sentence. There is a volunteer artist on hand who helps illustrate the story.

While the first part is collaborative, the second part sees each child write their own ending to the story, with support and encouragement from volunteer tutors at hand.

Each story is bound together with the illustrations, and is further personalised with a photo of the student on the back cover. The idea is they become authors of their own book.

“The ’blank sheet’ can be terrifying, and some children can stay terrified of it long afterwards” Doyle says.

“But with the Fighting Words model, they start filling that space collectively. It’s then a process of self-discovery, where children are encouraged to write their own story, finding out what can be done before what can’t be done.”

“The relationship between Fighting Words and DCU goes back a long way, but it’s now about formalising that connection,” says Anne Looney, head of DCU’s institute of education.

She said the partnership means teachers training at DCU will “go out with a sense of empowerment, of giving children agency and an opportunity for self-discovery, which is a great fit for what we are trying to achieve here.”

Dr Orla Lehanne will now become the full-time Fighting Words fellow at DCU and will liaise with Dr Francesca Lorenzi to help build complimenting methodologies and new opportunities across DCU.

“The beauty of these two organisations coming together is we have such common visions and goals around education and of what it can be” Dr Lehanne says.

From working with nursing homes, to helping children develop picture books from as young as four, Lehanne says it is a very exciting time for Fighting Words to help show how robust a model it is.

“It’s about giving people that sense of voice and agency,” she says. “We’ve had a long, informal relationship with DCU, so this partnership makes sense.

“We’re going to carry out a lot of research with the people who educate the educators and develop a way of integrating the Fighting Words model.”

Creativity for the future

Speaking at the launch of the partnership at the Séamus Heaney Lecture Theatre on St Patrick’s Campus, DCU president Brian MacCraith said the framework of Fighting Words was “so broad there was huge scope for a range of collaborations.”

In an age of technology, MacCraith stressed the arts act as a vital counter-balance for humanity, promoting vital skills such as resilience, positive mental health and expression.

“It reminds me of a famous quote by Thomas Merton which says that ‘art enables us to find ourselves and lose ourselves at the same time’.

“Expression is so important, and the creative element of the brain is so critically important in all aspects of a person.

“I’ve seen Fighting Words in action, and I’m a huge believer in it. There are massive possibilities with how creative arts and design can intersect with Stem subjects”.

“By making sure the teachers coming through our doors are aware of this model and the impact of Fighting Words, they can become transformers in their own communities.”