Essays for sale: a new wave of plagiarism

Students who use online essay-writing services face sanction if caught. As for the final product, our experiment suggests such work is far from guaranteed to pass 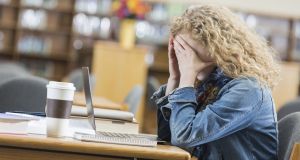 Essay-writing services might be attractive to under-pressure students, but using them constitutes plagiarism. Photograph: Steve Debenport/iStock

You have an avalanche of assessments, a flurry of essay deadlines and your exams are just around the corner.

So, when you see an advert for a company offering to write your essays for you, it sounds like an easy way out.

Google banned these adverts several years ago amid claims they were threatening the integrity of university degrees. Facebook, however, doesn’t seem to have followed suit, and adverts on the social-media site regularly tempt students with the lure of paid-for assignments.

What happens when you sign up for their services? We decided to try 9papers.com, one of the services that advertises regularly on Facebook.

It works on a bidding system, whereby writers bid on projects, with some of the more experienced writers asking for more on account of their experience.

It sounds simple: upload your essay title, choose the writer, and your payment is held by the site until the essay is written by the winning bidder. When completed, it is reviewed by both parties and the writer is paid.

We posted an advert for a 2,500-word sociology essay to be completed within a week. The title? “Critically discuss the contribution that the internet can make to the ‘public sphere’. Does the internet promote or threaten open, rational and democratic discussion in civil society?”

Within minutes we had numerous offers ranging from $20 to $80, with a few offering an impressive 24-hour turnaround.

We selected “KennyKitchens”. To date, he claims to have completed 355 works, with 243 positive reviews and one negative one. He says his subject matters range from political science, business and marketing to English and literature.

So, we forked out $70 for his services (although it came to only $60 because of the $10 discount 9papers.com offered for first-time users).

But, more importantly, was it any good? The effort was – to put it diplomatically – mixed.

Structurally, it seemed okay: it had an introduction, a middle and an end. But it read like a machine. The piece lacked any real coherence. It was riddled with grammatical errors. All in all, it read like a weirdly vacuous piece of work. Still, maybe it was passable?

Would this essay be red-flagged for plagiarism? Colleges nowadays have access to a range of computer programmes, such as Turnitin and Safeassign, that test whether articles have been copied from other academic texts.

However, these programmes only work if they detect parts of the essay that exist elsewhere; they might not flag plagiarised content if they are custom-written pieces.

To test the essay, we put it through Safeassign and it came back clean.

But it’s not just the plagiarism-detection programmes: it has to get past the beady eye of a lecturer. We presented the essay to a number of lecturers in communications and media without telling them about its origins.

“The way it’s written it seems like someone got an algorithm, scanned related texts and wrote around it,” said Dr Brennan, adding that the paper’s structure was correct but the writing and content was “bonkers”.

Dr Ken Murphy, a lecturer in DIT’s school of media, said the essay “goes against everything I’ve taught” and is “factually inaccurate”.

Both lecturers said the essay would fail if it was handed in.

It’s difficult to say how commonly these services are being used, but colleges are increasingly aware of plagiarism on campus.

There have been about 1,000 cases of students in Ireland being disciplined for plagiarism since 2010, and the numbers are on the rise (see panel).

In the UK, some academics have warned that essay-writing services are behind an “epidemic” of plagiarism.

Dr Mark Glynn of DCU’s teaching enhancement unit said most detected plagiarism tends to involve students simply cutting and pasting in a section and putting inverted commas around it.

“Students don’t realise that this is plagiarism, but these [essay-writing] services are blatant plagiarism,” he says.

Trinity College Dublin’s education officer, Molly Kenny, said these services were difficult to detect, adding that it was ridiculous that Facebook would advertise such services to students. Facebook did not respond to requests for comment.

DIT’s vice-president for education, Gareth Walker-Ayers, says any student using such a service was doing themselves a disservice.

“It’s dangerous for students to use something like this, because if it’s stolen or reproduced elsewhere and you’re caught out in the assignment, there is no defence. Students would be just leaving themselves vulnerable,” he says.

Essay-writing services, however, insist they have a legitimate role in supporting students.

An Irish example of these services is a website called Write My Assignments. It describes itself as “an online education development company offering support to private individuals and businesses by qualified writers and researchers.”

Louise Foley, who runs the site, says it offers “a broad range of services to private individuals including educational support, from one-to-one grinds to notes and sample papers.

“Our work always belongs to us and all clients are expected to use and reference it as they would any other online source,” she says. In the terms and conditions of the website they state they do not condone plagiarism.

Foley says the site and demands for their services continue to grow. They give out about 400 quotes a year and complete roughly 350 projects.

Foley would not say which universities and institutes give them the most work.

She confirmed that the majority of work was at BA and MA level and the disciplines that were most requested included nursing, business and early-learning years.

In some countries there has been an effort to reduce the impact of these services. It is now illegal in New Zealand for someone to offer a service that would include completing assignments, providing answers to exams or sitting an exam for other students.

Glynn says this could be an option in Ireland: “I would endorse it if it came in here – enforcing it is the challenge – anything to discourage student plagiarism.”

Students should be aware that using these services can be risky, potentially expensive and, in the end, the product might not be worth the paper it’s written on.

PLAGIARISM: A GROWING PROBLEM
Since the 2010-2011 academic year, there have been almost 1,000 cases of students disciplined for plagiarism across the Irish higher-education sector.

If anything, the number of cases is on the rise, with 236 cases recorded in the last academic year alone.

The real number is likely to be significantly higher, given that UCD, UCC, University of Maynooth and the Institute of Technology Blanchardstown had not provided figures at the time of going to print.

Of the colleges that supplied figures, the Institute of Technology Tallaght topped the list of detected cases of plagiarism (206), followed by the University of Limerick (162) and DIT (143).

All colleges reported that students were disciplined under their codes of conduct.

Institute of Technology Tallaght has one of the most extensive approaches to dealing with plagiarism, involving a sliding case of penalties, ranging from written warnings to potential disqualification from the institution.