Engineering: ‘Things are really bouncing back’ 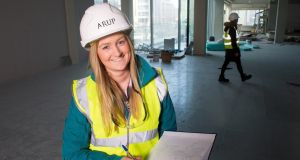 Shauna Hurley, structural engineer with Arup: “Everyone was saying there were no jobs available, but I was thinking long term.” Photograph: Daragh Mc Sweeney/Provision.

Shauna Hurley (24) had to endure a chorus of people advising her not to study engineering when she put it down on her CAO form during the depths of the recession.

“Everyone was saying there were no jobs available, but I was thinking long term,” she says. “I figured things would be different in about four or five years’ time.”

Today, young engineers such as Hurley are in huge demand due to an acute shortage of graduates and a growing economy.

After graduating in 2014, she got a job with Arup, a global engineering consultancy, which involved travelling and working on projects worldwide.

Structural engineering involves designing structures that are safe and capable of withstanding wind, earthquakes and other forces.

Her work involves designing structural elements such as floors, beams and columns using advanced 3D modelling software. It also involves working alongside other professionals including architects, mechanical and electrical engineers and project managers to produce an economical and sustainable structure.

“It’s all those elements working together that produce the most fascinating projects. Engineering lets you be part of a group of extremely talented people that make a difference in the world around us,” she says.

“For me, it’s looking at a structure or building and saying, ‘Yes, I was part of the team that designed that’ .”

The prospects for young engineers are exciting, she says, and not limited to staying at home.

“Look at the cranes on the skyline and the new buildings that are opening. Things are really bouncing back. Nowadays, [graduates] have a choice of jobs in Ireland or abroad.”

In Hurley’s case, she had an interest in architecture and construction, but her love of maths won out on the CAO form when she chose to study structural engineering in Cork Institute of Technology.

Her advice to school-leavers thinking of engineering is simple: follow your heart, not the points requirements.