End of two-tier pay scales for teachers to be considered, says Minister

Comments come after conflicting signals from Government over teacher salaries 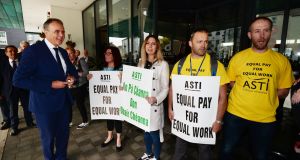 There are no ifs, buts or maybes: full consideration will be given to abolishing controversial two-tier pay scales for teachers, Minister for Education Joe McHugh has said.

But speaking at the annual conference of the Association of Secondary Teachers Ireland (ASTI) in Wexford, he said he could not give a timescale for this process to take place.

Mr McHugh’s comments came after conflicting signals from the Government on how far it is willing to go to tackle the legacy of the two-tier pay system, introduced eight years ago.

On Monday, a joint Government-ASTI statement indicated that remaining issues on new entrant pay would be given “full consideration”. This would happen either as part of a new pay review in the public service or as part of talks on a successor to the existing overall public service pay agreement.

This represents a shift in Government policy which, up until this week, insisted that the two-tier pay issue had been fully addressed. But on Tuesday morning the Department of Public Expenditure downplayed the immediate prospect of a new initiative to end two-tier pay in the public service.

It maintained that the text it agreed with unions stated that outstanding issues relating to the lower-pay arrangements for staff taken on since 2010 “may” be examined by any pay process put in place ahead of talks on a successor agreement should that situation arise. In its statement, the department wrote the word “may” in capital letters for emphasis.

It said: “There is no commitment to address issues outside [the] pay agreement at this stage.”

On Tuesday evening, Mr McHugh said there was now a wording agreed and a commitment that either talks on the recent-entrant pay issue will begin through a review mechanism – whatever they may look like – or in future negotiations.

Mr McHugh said the Public Service Pay Commission had suggested last autumn that at some stage there could be a more general examination of the adequacy of current pay arrangements.

“I am aware that the parties to the Public Service Stability Agreement [the current public pay deal] are currently engaged in exploratory discussions on how such a review mechanism might work and how it might inform discussions on a potential successor agreement”, he said.

The Irish National Teachers’ Organisation (INTO) was also sticking by its position that an end is now in sight to two-tier pay scales following the shift in Government policy.

General secretary Sheila Nunan said: “We are operating off the text that was agreed between parties to the Public Service Stability Agreement. The text is the text and that’s the basis on which the INTO will be engaging.”

Delegates at the INTO congress in Galway and at the ASTI conference overwhelmingly backed motions on Tuesday calling for an end to the two-tier system in the next round of pay negotiations.

Mr McHugh also said the Department of Education will engage “in a constructive way” on the impact of financial penalties imposed by the Government on members of the ASTI following industrial action nearly three years ago .

This issue has become highly controversial in the union in recent months after the Government decided not to apply similar sanctions on nurses after their strike earlier this year.