Empathy, creativity and teamwork - the future of Irish education? 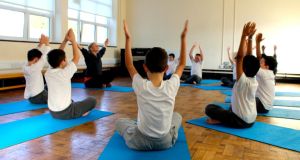 The Ashoka Ireland launch of Changemaker Schools gives innovative educators, such as Fiona Collins, principal of Francis Street CBS in the Liberties, the chance to showcase programmes they have developed to create a more stimulating classroom environment.

“No real education can happen unless social and emotional needs are met,” says Ms Collins, who four years ago began to build a new educational programme at Francis Street CBS.

Today, the school’s ethos is based on emotional resilience and emphasises the importance of social and emotional learning, problem-solving and leadership.

“I felt that our children needed to learn skills that would not only work in school but also when faced with situations of conflict and stresses in their everyday lives.”

The boys are taught mindfulness meditation, take yoga classes, and are encouraged to deal with conflict using restorative practices.

“The kids sit in a circle and talk about it,” she says. “My whole approach is building empathy, standing in other people’s shoes.”

Ms Collins says her goal is to show students how to create change in their own communities so they can become “leaders” and “changemakers”.

“Children as young as nine are presenting with symptoms not far off anxiety and early onset of mental health problems, where they need a coping strategy. We give them the tools to deal with these emotions.”

She says changes in Irish education must begin at grassroot levels.

“We can’t expect the Department of Education to make the change for us. We have to do it for ourselves.”

Francis Street CBS was selected by Ashoka Ireland, along with four other schools in Dublin, Cork, Kerry and Armagh, to join a global network of 100 Changemaker schools focused on empowering students to become social entrepreneurs and make real change.

She says she has noticed a shift in what Irish parents expect from their children’s education. “They don’t want their kids sitting there and being taught at,” she says. “They should be encouraged to ask questions, work together and learn about other communities.”

Ms Cashman, who retired in September, says the school’s facility for deaf children means that every child and teacher learns sign language. This shows children that deafness isn’t a disability, it’s just a means of communication, she says.