Heated exchanges at creditors meeting as language school closes with €1.4 m in debts 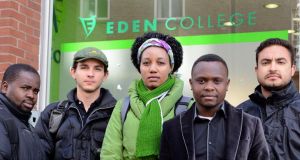 The owner of Eden College has denied that he “trousered” school fees from students prior to the English language college closing last month.

Amid heated exchanges with students at a creditors’ meeting in Dublin, Fakir Hossain said he was forced to close because of financial difficulties experienced by the school’s sister college in London.

Students and other creditors attending the meeting challenged Mr Hossain’s accounts, saying they grossly underestimated his liabilities to them. They also queried debts of over €460,000 which were listed as owing to Mr Hossain or companies owned by him.

A statement presented by Mr Hossain to the meeting listed a total deficit of €1.35 million, including over €1 million owed to unsecured creditors.

Some €57,933 of this was listed as student deposits. But this figure was challenged by Kevin Barry, a solicitor representing 216 students, who said his clients alone were owed €337,000.

Explaining the figure provided, Mr Hossain said the school’s policy was that only those who had yet to commence a course were eligible for a refund, and anyone who had started a course was not so eligible.

Mr Hossain was also questioned about a payment in 2002 to a company in Bangladesh owned by his father for “software development” as well as loans between Eden and another of his companies Mind Leaders Ltd. However, he said he had tendered externally for all services involving family companies, and rejected suggestions that he had taken money out of the company.

“We have not trousered the cash,” he said.

He told the meeting that Eden College was founded in 2006 and acquired by him in 2011. He said it had had a “flourishing existence” and had planned to launch a partnership with a third level institution in Ireland this September.

However, this changed last February when its sister school in London was named in a BBC Panorama programme investigating student visa fraud.

This had caused a “ripple response” and drove students away. When the Dublin school was suspended from the register of approved colleges last month closure was inevitable, he said.

Among the unsecured debts owing was €19,680 to Mark O’Keeffe and Co, a firm of chartered accountants operated by the son of former minister for education Batt O’Keeffe.

His father was appointed president of Eden College in February 2013 and resigned the position earlier this year. He has declined to comment on a Sunday Times report that he was paid €75,000 a year for the role.

The biggest sum owing to an unsecured creditor was listed as €322,000 for Chill Out Ventures, a company owned by Mr Hossain which provided accommodation services. Mind Leaders Ltd was said to be owed €52,850 for “management services”, while Mr Hossain himself was listed as due €71,600 personally for a mixture of unpaid wages and a loan.

He said he had a monthly salary of €4,100 but in recent times had taken significantly less than that.

Three preferred creditors were listed: Revenue (owed €60,166) Dublin City Council (€122,097) and the employees (€157,657). However, Revenue said the figure listed was incorrect and a greater sum was owing, while the local authority also challenged the figures saying it was owed €220,000.

Meanwhile, the first meeting of the Government task force to protect students affected by the closure of private colleges has taken place.

The group is seeking to estimate the scale of the problem, with Eden College alone listing 1,200 students on its books, while also investigating the capacity of remaining colleges to accommodate “genuine students” affected.

An initial report of the task force is due next Friday.