Easter Rising is recreated by students at Trinity Comprehensive in Ballymun

The students and staff of Trinity Comprehensive in Ballymun sent their school back to 1916. From the tenements to the GPO they re-enact all aspects of the world of the rebellion. 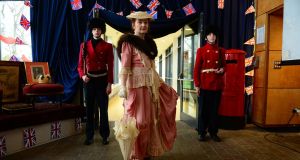 On a normal day Edel Fitzpatrick would be teaching her young students about history from a dusty schoolbook.

But yesterday at Trinity Comprehensive secondary school in Ballymun, those pages became alive.

Classrooms were transformed into tenement slums, the artroom was remodelled as a makeshift GPO and the corridors were converted into the draughty confines of Kilmainham Gaol.

It was part of an ambitious plan to turn the school into an interactive 1916 experience, recreating the sights, sounds and smells of the era.

Judging by the reaction of schoolchildren and parents who took part yesterday, it was a resounding success.

And, in the process, it galvanised an entire school and led to a surge in interest among students in the revolutionary period.

At the beginning of the tour, home economics teacher Colette Lee – playing the part of a middle-class, ascendancy wife – reclined in her drawing room (the school foyer), resplendent in a handmade Carrickmacross lace dress and mink fur stole.

She told a group of rapt primary school students of how significant numbers were very happy to be part of the British empire.

“Our king ruled over so much of the globe. Look at the red on this map? Some ladies who lived here, the ones in Merrion Square, would have said ‘God Save the King!”

The schoolchildren were quickly ushered on towards a tenement home, where they saw the dirt and squalor up close.

They learned, too, of the alarmingly high death rates facing young people of the era.

Soon, they were whisked into a room transformed into the Wicklow mountains where a John Redmond lookalike encouraged the schoolchildren to enlist in the British army.

Minutes later, in another room, a young Patrick Pearse gave a rousing oration, exhorting mourners at the graveside of O’Donovan Rossa to rise up against the British empire.

Soon, the tour was transported to the GPO (the art room, with a giant image of the post-office beamed across it), as bullets flew, bombs exploded and panic erupted on the street.

“Can someone tell me the way to Rathmines?” shrieked a bystander, caught up in the confusion.

The tour finished in the courtyard of Kilmainham Gaol, where the leaders were executed by firing squad.

Darren Kerville, a fifth-year student, played the executed Pearse. He enjoyed the experience – even if it meant getting shot dozens of time a day for the touring groups

“I can see why the country is a republic – and it’s really good to be part of this. It’s given me more confidence.”

Caitlin Roddy, who played an old lady in a tenement, was also on a high after a day of performance.

She said: “You’re living the history rather than just reading it. You realise how bad conditions were, how horrible it was and cold it was for people.”

Today, normal classes at Trinity Comprehensive resume. The sets will be taken down; the sandbags removed and paint taken off the walls.

But, said Fiona Gallagher, the school’s deputy principal, the impact will linger far longer among the students.

The names of the old tower blocks in Ballymun – named after many of the 1916 leaders – might not have meant much to a new generation of students. But that has changed for many.

“They’ve been able to go behind the pages of the history books,” she said.

“They are passionate about history. It’s not just about academic learning: emotional engagement, creative writing is the real result of this. That’s something they won’t forget for many a long day.”