Employment opportunities knocking for college graduates, with salaries on upswing 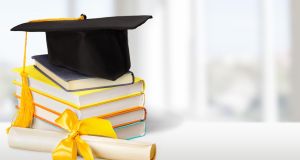 Graduated findings are contained in a survey of Irish universities and colleges of education in 2014 – nine months after graduation, published by the Higher Education Authority. Photograph: Thinkstock

Computer science students are in high demand and most likely to earn most after graduation, new research shows.

Overall, employment opportunities for graduates of Irish universities have improved significantly over recent years, the number emigrating has fallen, while starting salaries have climbed slightly.

However, arts and humanities graduates were most likely to earn less, and say their education was of little relevance to their employment.

More than 25 per cent of arts graduates were earning less than €13,000 in their starting salaries.

The findings are contained in a survey of graduates of Irish universities and colleges of education in 2014 nine months after graduation, published today by the Higher Education Authority.

It shows that employment rates for honours bachelor degree graduates have risen significantly in recent years, up from 45 per cent in 2009 to 58 per cent in 2014.

Overall, computer science/information and communications technology (ICT) honours bachelor degree graduates were the highest earners, with 62 per cent earning €29,000 or over.

They were followed by engineers, health and welfare graduates and agriculture and veterinary graduates.

Arts and humanities graduates earned the least, with 25 per cent earning less than €13,000. For those who graduated in 2014 from social science, business, law, journalism, and information and administration the usual salary was between €21,000 and €32,999 (34 per cent).

The earnings gap between arts and other disciplines is striking. While 25 per cent of arts graduates earned below €13,000, the equivalent figure for computer science was just 5 per cent and for engineers it was 6 per cent.

The most job opportunities were in the greater Dublin area, followed by the southwest. The highest earners were more likely to be in the capital.

Some 53 per cent of honours bachelor degree graduates rated the relevance of their qualification as relevant/most relevant to their area of employment, rising to 60 per cent among doctorates.

Tom Boland, chief executive of the Higher Education Authority, said the findings highlighted many positive outcomes for graduates. “Overall, employment levels – and employment in Ireland in particular – have improved from last year, and fewer graduates are going overseas for work.”

He said the report allowed the country to benchmark its performance internationally. “The high quality of our graduates is key to their success, and ours as a country, which is why we have to guard that quality zealously and resource it.”