Coalition plan to end homelessness is ‘Alice in Wonderland fantasy’ 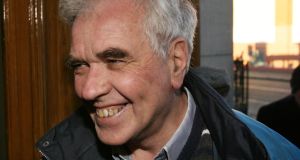 Homeless trust founder Fr Peter McVerry said on Tuesday for the “first time since the famine, we now have families sleeping in the streets, families with young children being told ‘there’s no accommodation available, you’re on your own’”.

A housing conference has been told the Government’s plan to provide 35,000 new social housing units by 2020 and end homelessness by 2016 are a “fantasy”.

Speaking at the Joint Housing Conference held in Dublin Castle today, homeless trust founder Fr Peter McVerry said families are now being forced to sleep on the streets due to concurrent crises which are developing in the private, rental and social housing sectors. He also dismissed the Government ambition to eradicate homelessness by 2016 as unachievable based on the available resources.

“I think we have a perfect storm. We have three housing sectors; the private, the social and the rental market, they’re all in crisis at the same time.

“I think the storm is going to reach gale force coming up to the next election, and that’s going to pose a huge problem for Government,” he said.

“Probably for the first time since the famine, we now have families sleeping in the streets, families with young children being told ‘there’s no accommodation available, you’re on your own’,” he added.

The Government intends to provide some 35,000 new social housing units over the next six years as part of its Housing 2020 strategy.

However, delegates at the conference expressed scepticism about proposals to eliminate social housing waiting lists, saying such a prospect would require 75,000 people to be moved into a rental market that was already at capacity.

Fr McVerry said hostels were struggling to cope with an increase in Dublin’s homeless population, a situation he believed was being exacerbated by the inability of people to move into a rental market unable to accommodate new entrants.

“The intention of the strategy is to eliminate social housing waiting lists by 2020, and that reminds me of the homeless strategy which is to eliminate homelessness by 2016. Both of them I would consider to be Alice in Wonderland politics.

Edgar Morgenroth of the Economic and Social Research Institution (ESRI) told the audience that the undersupply of housing units across the Irish market was constraining economic development, inhibiting local businesses, and dissuading foreign investors from setting up in the country.

According to Marion Fitzgerald of estate agents Sherry Fitzgerald, less than 1 per cent of the housing stock in Cork and Dublin was currently available for sale, leading to rising inflation within the market.

Construction of new houses within the Dublin region fell from 7,500 in 2006 to just over 500 in 2013, a situation which has contributed to a chronic shortfall in housing stock in the nation’s primary population centre.

Nama has already dedicated €450 million to building 1,500 houses for private sale this year, but a Cabinet report released last month revealed that of 80,000 new housing units that could be built in the capital over the next six years, the construction of around 50,000 was constrained by ongoing infrastructural deficits in areas zoned for development.

In his contribution, Labour Party councillor for Dublin city Dermot Lacey said departmental bureaucracy was to blame for the failure to deliver enough units for an increasingly voracious housing market.

“In every single housing project I’ve been involved in, the single biggest stumbling block to delivery was the inept, incompetent, bureaucratic interference of absolutely absurd rules and provisions by the Department of the Environment,” he said.

Opening the second and final day of the conference, Minister of State for housing Paudie Coffey acknowledged that constraints on resources and the costs associated with supplying accommodation remain issues for his department.

“Our recent return to growth does not in itself herald the end of constraints on resources. We need to ensure that public investment is targeted widely and effectively, not least the €2.2 billion now committed to the delivery of 10,000 social housing units over the next three years,” said the Fine Gael TD.

“We need to challenge our own traditional rethinking- do we need to reset local government, including Government, in terms of the charges we apply in the delivery of housing?” he added.