Opinion: Catholic schooling has much to offer a more pluralist society, including a spirit of inclusivity and social justice 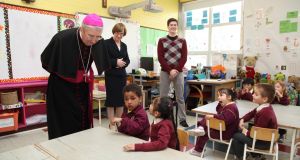 The push for a wider pattern of patronage of schools in the Republic is to the fore these days.

Catholic Church authorities are well aware that a situation in which more than nine out of every 10 primary schools are Catholic is as undesirable as it in in untenable in an increasingly multiracial, religiously diverse, secularised society.

That said, there is obviously still a strong demand among parents for faith-based schools in their communities, as those trying to divest some of them are finding out to their annoyance.

In addition, the difficulties associated with entrance requirements for oversubscribed denominational schools have led to much heated debate. More needs to be said about the responsibility of government to ensure there are enough school places and choices of patronage in such districts to meet parents’ demands.

In the face of both the enduring strong demand for faith-based education and the rather ferocious attacks that Catholic schools in particular attract from some quarters, it has to be acknowledged that many advocates struggle to articulate what precisely constitutes the Catholic ethos in education.

Yes, they treasure the ethos; yes, they know the sense and feel of a Catholic school where its characteristic human and spiritual values are honoured and lived. But ethos is, traditionally, more assumed and taken for granted than it is defined in Irish schools.

That is not to suggest that ethos is something vague or unimportant. On the contrary, it is essential, and it is something that Catholic schools in the State urgently need to put words on.

The urgency of this task is underlined by the commitment, even zeal, that some alternative approaches to education bring to the contemporary public square when explaining their standpoints and ethos.

Historical context goes a long way in accounting for it. Catholic schools emerged in Ireland following the relaxation of the penal laws against Catholics from the end of the 18th century.

At long last the Irish church could be part of that impulse across Catholic Europe following the Reformation that prioritised the importance of better education for the clergy and lay people alike in newly established seminaries, schools and universities.

The church’s interest in providing schools with a wide curriculum was attractive to the emerging Irish Catholic middle classes in ways beyond the purely spiritual: these parents set a high priority on the education and social advancement of their children, and were anxious to demonstrate that they could be as civilised and respectable as their Protestant neighbours.

One reflection of this new sense of purpose and authority was the number of nuns, so critical to developing educational provision (and healthcare) by the church in Ireland; their numbers grew from about 120 in 1800 to 1,500 in 1879 and 8,000 in 1900.

Furthermore, the social standing of Catholicism became all the more apparent in the wake of the famine, when emigration was in full flood and use of the Irish language was in sharp decline.

The historian Patrick Corish speaks of the emergence of a cultural nation “in great need of something to hold for pride” and he asserts that the Catholic religion was to become “the clear response to this search for identity and inspiration”. This was, he says, not least because Irish Catholics could take great pride in the many millions of emigrants and their descendants who constituted “Ireland’s spiritual empire”, especially in the US and Australia.

Following the 1916 Rising, the question of identity took on even greater importance. So close was this link between Irish identity and Catholicism, so self-evident did it seem that there was practically no need to spell out at length what precisely constituted the much-vaunted ethos.

But things would change. Economic development, mass media, membership of the European Community and increased travel meant that slowly Ireland would become part of the western mainstream. Also the Second Vatican Council (1962-1965) unleashed a spirit of renewal and reform within the church.

Today we live in an Ireland that no longer needs Catholicism to underpin its sense of itself. A highly secularised society has emerged, one that has also been traumatised over the past quarter century by disclosures of clerical abuse.

In this new context Catholic schools often find themselves in the line of fire from the media, politicians and academia. How, it is often asked, can there be a place for publicly funded denominational schools in an ever more secularised, pluralist, multireligious republic?

Faith communities can no longer take their schools for granted, but must try to put language on what precisely constitutes the distinctive ethos they so value and wish to see continue, and also demonstrate to wider public opinion the added value these schools and their work bring.

Although commentators in the Republic often share an assumption that the Northern Ireland experience has nothing to teach southerners, it seems fair to say that Catholic education in the South could learn a thing or two from the North on this matter.

In the North, Catholic-managed schools account for the education of just over half of all children. There, Catholic education is, for the most part, more experienced in and comfortable talking about the distinctive character of faith-based education. It is well-versed in the need to demonstrate that Catholic education can have no truck with sectarianism and that it offers a vision of education open to all who can value and appreciate its characteristic ethos. Catholic education, as the North’s Department of Education inspectorate reports point out, is academically high-achieving and much-praised for the pastoral, spiritual and social outworking of its ethos. Thus Catholic schools there more than happily coexist alongside state-controlled, integrated and other types of schooling. That is not to imply, however, that they are not under pressure from a broader UK educational landscape that is increasingly shaped by utilitarian tendencies.

Catholic education in the Republic needs to be confident that it has much to offer a more pluralist society in the decades ahead and that this will be widely recognised. Its commitment to a holistic education for all, addressing the academic, spiritual, personal and social dimensions of people is more important than ever.

When Catholic schools are faithful to their own distinctive ethos, they transcend those pragmatic and utilitarian philosophies of education that understand the educational enterprise as merely an instrument for the acquisition of information that will improve the chances of worldly success and a higher standard of living.

Catholic education at its best has a profound spiritual and social vision that builds up our capacity for empathy with others, especially the poor and the newcomer.

Catholic educators needs to articulate and give concrete shape to their vision of education as essentially a humanising endeavour characterised by love, hope and social justice, forming young people who will serve the world with their gifts.