Catholic and Protestant schools to share facilities in North 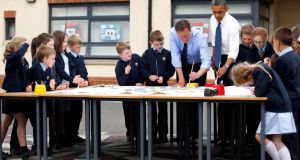 US president Barack Obama and British prime minister David Cameron during a visit to Enniskillen Integrated Primary School when both leaders were attending the G8 summit in the North last year.

Northern Ireland’s political leaders are to announce initiatives this month aimed at promoting “shared education” between Catholic and Protestant pupils, including confirmation of a £25 million (€30 million) investment package

Belfast-based news website The Detail has established that the funding is to help ensure the “mainstreaming” of shared education programmes in the North’s divided education system and will be followed by separate announcements about creating shared facilities for schools and a consultation on potentially drawing down millions in further funding from the EU.

The announcements are due to be made throughout this month but there are concerns that they come against the backdrop of renewed political tensions between the DUP and Sinn Féin at Stormont.

The emergence of “shared education” as a central plank of government policy is the latest attempt to break down deep- rooted sectarian divisions.

It has been 3½ years since First Minister Peter Robinson described Northern Ireland’s education system as a “benign form of apartheid which is fundamentally damaging to our society”.

He said then that consideration should be given to charging a body or commission to bring forward recommendations for a staged process of integration.

That research found that almost half of the North’s schoolchildren were being taught in schools where 95 per cent or more of the pupils were of the same religion.

In the 2011/12 academic year 180 schools had no Protestant pupils and another 111 schools taught no Catholic children.

Integrated schools bring children and staff from Catholic and Protestant traditions, as well as those of other faiths, or none, together in one school.

There are 62 integrated schools in the North educating more than 21,000 children.

However, in recent years the government’s focus and language has changed.

The desire to fully integrate Catholic and Protestant children in schools has been replaced by an acceptance that many schools remain separate and so instead they are being encouraged to “share” – classes, facilities, teachers and even buildings. Integrated education purists say this isn’t radical enough – while others claim it is a more realistic option for the here and now and may even lead to fully integrated schools in some areas in the future.

Northern Ireland’s Shared Education Campus Programme was launched as part of the Executive’s “Together building a United Community” initiative announced by the First and Deputy First Ministers in May last year.

This included that work on 10 shared education campuses would begin within the next five years.

British prime minister David Cameron and US president Barack Obama visited an integrated primary school in Enniskillen when they arrived in Co Fermanagh for the G8 summit in June of last year.

The choice of visiting a fully integrated school project as opposed to a shared education initiative was read in some quarters as a snub to Mr Robinson and Mr McGuinness.

The Westminster government and US authorities subsequently sought to play down the incident.

Barbara Stephenson, the former US consul general in Belfast, later said the US government applauded all work being done to bring children together in the North.

She repeated support for the integrated movement, but also welcomed shared education as “part of the solution set”.

It was announced in April that 15 expressions of interest had been submitted – ranging from shared sports facilities to joint school campus models.

Minister of Education John O’Dowd said it is anticipated work will begin on the construction of the campuses by 2016.

Atlantic Philanthropies is one of the organisations that has previously funded The Detail.

Mr O’Dowd has described the Lisanelly Shared Education Campus, based on a former army site in Omagh, as “a game-changer in terms of how we plan education”.

Phase one of the building work for the project got under way last October with construction costs estimated to be over £120 million.

Partly as a result of these cost implications, the Department of Education’s shared education campuses protocol warns that the Lisanelly Shared Education Campus should be recognised as unique.

The 15 proposals currently being considered by the Department of Education include a proposal for two primary schools in Moy.

Catholic St John’s Primary and Moy Regional primary (mainly Protestant) have put forward a plan to share a school building but would keep their own identities with separate school uniforms and be based in different wings of the building. Another bid is for Armagh Educational Village in a proposal to locate selective and non-selective schools from the controlled, voluntary grammar, Catholic-maintained sectors on one site in Armagh and incorporate the campuses of the Southern Regional College.

Shared education The School Omnibus Survey is designed to collect a range of information for the Department of Education’s policy teams. Questions were issued to school principals in March last year covering seven issues

– one of which was shared education.

What the survey does not tell us is how focused the sharing was for these schools.

We do not know how many schools just participated in a single joint school activity on one day – possibly involving one class.

Or how many were at the other end of the scale with school principals from different schools regularly meeting and planning together for a series of joint classes and activities.

The Fermanagh Shared Education Programme helps to develop links between schools from different sectors, creating the potential for joint working, sharing and collaboration.

Funded by the International Fund for Ireland and Atlantic Philanthropies, the programme provides funding to schools in the county to deliver part of their curriculum jointly with another local school on a cross-community basis.

Brookeborough Shared Education Campus is one of the proposals from Fermanagh currently being considered by the Department of Education and would involve a new shared education campus built on a neutral site to accommodate St Mary’s Primary School and Brookeborough Primary School. The campus would include cross-community playgroup the Playstation.

Each school and playgroup would retain its own separate ethos and identity and the campus would also be open for local community use.

The proposal has been endorsed by the Council for Catholic Maintained Schools and the Western Education Board and would build on cross-community work already taking place between the two schools.

“We now have schools working together that traditionally would seldom or never have worked together. In many areas where there are minority and large majority communities it is not realistic to have one integrated school.

“What shared education offers is the space and opportunity for pupils, teachers, principals and boards of governors to work together, bringing real educational benefits for our young people. Who knows what that could lead to.”

Kathryn Torney is deputy editor of The Detail. For more on this story see thedetail.tv