ASTI’s leadership focused on conflict rather than compromise 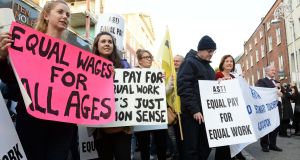 Almost a year ago today, Pat King, the then general secretary of the Association of Secondary Teachers, Ireland (ASTI), privately issued the union’s executive committee with a stark warning.

The logic of the union’s industrial relations strategy was that teachers could forfeit thousands of euro. Younger teachers would face reduced entitlement to permanency because of the union’s stance. A full-blown dispute, he said, could lead to widespread school closures due to strikes or a lock-out.

Acknowledging a weakness in the union’s stance, he said: “ASTI will be in a totally isolated position, with no support from the rest of the trade union movement and facing a bitter onslaught from the public and the media. This will greatly strengthen the Government’s position.”

It was a prescient warning. The union has now brought the second-level education system to the brink of unprecedented upheaval. The union’s saving grace is that gardaí are due out on strike as well, leaving it with some allies among public sector unions.

Widespread school closures loom on Thursday as a result of a one-day strike. More significantly, there are rising concerns that hundreds of schools may not reopen indefinitely following the mid-term break.

Students in exam years face into a prolonged period of uncertainty. Parents who are struggling to balance work and family commitments may find their schedules thrown into chaos.

And teachers – especially those in dual-union schools – look set to be hit with pay losses and the prospect of ongoing tension and ill-feeling in staffrooms.

The most frustrating aspect of this is that none of it needed to happen in the first place.

There is justifiable anger among teachers. Many teachers, especially those who are newly qualified, are furious at the impact of salary cuts. There is widespread resentment over the heavy-handed way additional working hours have been imposed on a profession which has prided itself on going the extra mile for students.

This anger is not exclusive to members of the ASTI by any means – teachers in both the Teachers’ Union of Ireland and the Irish National Teachers’ Organisation are just as incensed.

The crucial difference is the leadership of those two unions embarked on a much smarter negotiation strategy, which has yielded significant gains for members.

They have secured pay increases of between 15 and 22 per cent for new teachers between now and January of 2018, significantly narrowing the two-tier pay gap, without giving up their main aim of full restoration.

This is in addition to supervision and substitution payments worth almost €1,600, faster access to full-time posts for part-time teachers and greater flexibility on how to use so-called Croke Park hours.

The ASTI, on the other hand, has backed itself ever deeper into a cul-de-sac with little space to manoeuvre.

Over recent months it has been given numerous opportunities by the Department of Education to engage in meaningful talks.

So, who is calling the shots? And what strategy is the union pursuing? And how far it is it willing to go?

The union is often depicted by its critics as a hotbed of Trotskyites. The reality is much more complex.

There are some influential radical left-wing members – particularly in the union’s Dublin north-east branch – who have been behind most of the motions which have brought the union to this point.

There are also conservatives in key positions at senior level who are resistant to education reform, opposed to partnership agreements and happy to acquiesce to this agenda.

But the vast majority of ordinary members are simply angry at pay cuts and trust that their union’s leadership has embarked on a sound strategy to secure gains for members.

That much is clear from the overwhelming mandate the union secured recently for industrial action.

What is less clear is whether members are fully aware of the consequences of its current trajectory.

Left in the dark

Others say the realisation that they could lose pay for an extended period has come as a big shock.

There is also real anxiety over what kind of tension and ill-feeling may follow the upcoming industrial action. This is particularly the case over the indefinite shutdown of schools following mid-term.

“With the one-day strike, we can go back to work and it’s for a good cause – new entrant pay,” says one union member. “But the withdrawal of supervision is because of a fairly arcane issue: supervision payments. That could shut schools and they won’t reopen until there is a solution. What kind of sympathy will we get for that?”

If there is a coherent strategy at this stage, it increasingly appears to be a case of points-scoring over other teaching unions.

It is not a coincidence that the first strike day comes this Thursday – the same day as a long-planned march by the INTO and TUI.

Any solution from the ASTI’s perspective will need to be something far better than what the other unions have been able to deliver to date.

Expectations have been raised so high, however, it’s difficult to see how more radical members on its executive committee will be placated. This could be a long, difficult and costly dispute – for everyone involved.