A live Caesarean section: ‘You don’t see this on Grey’s Anatomy’

190 transition year students witness the birth of a baby from a caesarean section via video link from the Rotunda Hospital. The students are participating in the MiniMed programme at RCSI (Royal College of Surgeons in Ireland). Video: Bryan O'Brien 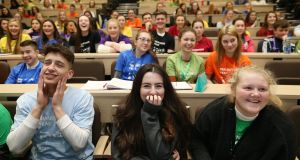 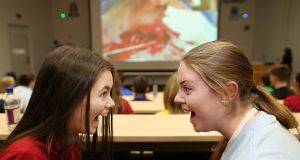 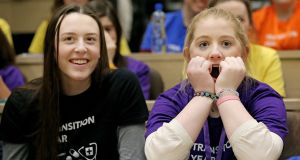 ‘If you think this is getting a bit bloody or gruesome, or you’re feeling faint, I suggest you step outside,” the gynaecologist warns.

There is a sharp, collective intake of breath in the crowded lecture theatre. It’s not long after breakfast, and some 180 secondary school students are about to witness a Caesarean section beamed live from the operating theatre of the Rotunda.

A 26-year-old woman has volunteered to be filmed anonymously as a team led by the new master of the hospital, Dr Fergal Malone, performs the surgery.

The students will glimpse the first moments of a baby’s arrival into the world, but not before sitting through a journey of blood, tissue and amniotic fluid.

This is part of a week-long transition year programme organised by the Royal College of Surgeons in Ireland. It is not the kind of sanitised depiction of surgery most are used to watching on fictional TV shows such as Grey’s Anatomy, House or ER.

The programme is designed to give students an authentic, front-row view of medicine in the real world. The organisers realise it might well turn off as many as it engages. But that is the point.

“We don’t sugar-coat anything on this programme,” says Dr Steven Kerrigan, the course co-ordinator. “This is exactly what doctors do. For some it confirms their interest. Others may be turned off, but that’s what we want. If you’re going to spend seven years studying to be a doctor, you need to know what’s in store.”

The surgery gets under way. If some students are feeling a little queasy, Malone’s calm and professional air seems to soothe the atmosphere. He explains that the woman is fully alert but has been administered a spinal anaesthetic and is numb from her waist down. She might feel some pressure during the procedure, he says, but no pain.

Within minutes he is cutting through the outer layers of skin and tissue. His touch seems assured and steady. “You can see here we’re stretching the muscles of the abdominal wall – called the rectus muscle – to give us some space to get into the abdominal cavity,” he says.

To the untrained eye the video screen is an unfathomable mixture of tissue, muscle and blood. “Now we’re making a little space between the bladder and the uterus.”

“We’re making an incision in the uterus. We’ll see some amniotic fluid now . . . There’s a little splash.” Liquid gushes through the incision. There are peals of disgust and squeals of laughter among the audience.

“And now, here’s the baby’s head emerging. He’s already starting to take his first breath.” The wrinkled, pink face of an infant emerges. Within a flash the tiny boy is out of the womb. He begins to wriggle and cry for the first time.

There is a spontaneous round of applause and beaming smiles around the room. Some students dab their eyes.

There is more applause.

Within minutes, it seems, the team has expertly stitched back the opening and the patient is removed to a recovery room.

“It’s definitely different to what you see on Grey’s Anatomy,” says Ella Caird (15) of Malahide Community School. “I thought I was going to be sick, to be honest. But it was really cool when the baby was born.”

Cormac Egan (15), a student at Drimnagh Castle Secondary School, says surgery probably isn’t for him. “I think it’s amazing they can do that. I never realised there were so many layers to the skin. I was a bit freaked out when they started cutting into her.”

His classmate, Sean Fitzpatrick, on the other hand, feels more determined than ever to do medicine. “I would like to be the person to bring a baby into the world; to be able to help people. That’s amazing. The blood wasn’t too bad. I watch The Walking Dead. It’s basically like that.”

Triona Bulger (16) of Malahide Community School is fired up by the experience. “I wasn’t too sure before, but seeing everything today has pushed me further towards medicine,” she says. “It’s something I’d definitely like to do. I didn’t feel great with the blood, but it was pretty amazing all the same.”

Within minutes Malone is back on screen. He has just been down to see the mother and baby, and both are doing well.

“It is, by and large, a very happy speciality,” he says, in response to students’ questions. “To be able to deliver a 10lb baby and to be part of that process . . . Not a lot of things give you that positivity. It’s a real privilege to be part of that.”

He fields a range of questions, such as whether there is an age limit for C-sections (there isn’t) and what kind of material was used to stitch up the woman (dissolvable sutures) and whether the baby will be named after him (“eh, no”).

He also tells students of the more challenging side of surgery, such as complicated pregnancies that can involve operations of up to six hours, or dealing with very difficult cases involving cancer.

For the students, this is day two of a week-long programme. By the end of the week they will have seen more than 40 different areas or disciplines, ranging from more live surgery (in this case, seeing someone’s tonsils being removed) to the work of regular family doctors.

The RCSI’s “mini-med” programme is hugely oversubscribed, which is why a maximum of two students is allowed from each participating school. For those who can’t make the programme, the college also offers free videos online (see panel) and interviews with health professionals for students .

Against a backdrop of high student dropout rates in many third-level institutions, there is concern that many students are making ill-informed choices about their college courses. Professional bodies and colleges are seeking to ensure students know what they are taking on.

It might or might not be a coincidence that drop-out rates for medicine – where these kinds of career-guidance courses have been taking place for several years – are some of the lowest of any discipline.

“Before these programmes, students often weren’t well-versed in what it was they were getting in to,” says Kerrigan.

“With this, the idea is to educate young people at age 15 or 16 about what we do every day of the week and to take time to research their options further. We often see by the end of week that the ones who were hemming and hawing about medicine are convinced that it’s what they want to do.”

A DOCTOR’S LIFE: WATCH THE VIDEOS

So you want to be a doctor? You can get a revealing insight into doctors’ daily lives in a three-part broadcast series produced by the Royal College of Surgeons in Ireland.

“We are bringing young people right to the coalface of healthcare, into labs and into theatre, so they can get a real-life feel for what their lives would be like if they chose to study medicine,” says Prof Arnold Hill (left), head of RCSI’s school of medicine.

The series is aimed mainly at young people in transition year, fifth year and sixth year who are interested in careers as a doctor.

Although the live-streamed and interactive versions of the programmes are finished for this academic year, the videos are available to watch on rcsi.ie/beadoc.

They profile leading healthcare professionals working in the Irish system. In particular, they focus on neurosurgery, microbiology and orthopaedic surgery.