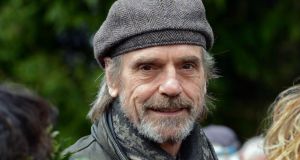 The actor Jeremy Irons , at the Walk in the Woods protest and concert in Avondale Forest Park , opposing the sale of the harvesting rights to Ireland’s forestry, at Rathdrum, Co. Wicklow, today. Photograph: Eric Luke/The Irish Times 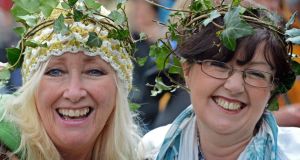 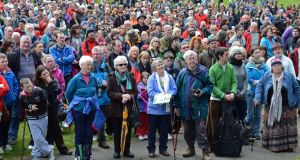 An estimated crowd of 3,000 people, including actors, artists and politicians gathered for a walk in Avondale Park in County Wicklow yesterday to protest at plans to sell Coillte harvesting rights.

The march organised by the Woodland League and the National Resources Protection Alliance featured poetry readings and picnics and a tree was planted by actor Sinead Cusack. Musician Christy Moore played at the event which was also attended by Paddy Casey and actor Jeremy Irons.

Avondale Forest Park, the 214-hectare former home of Charles Stuart Parnell but is also regarded as the birthplace of modern Irish Forestry.

Traffic in the local village Rathdrum was slow for much of the afternoon and a special car park was opened to cater for mini buses. Local hotels and tourist facilities also reported an increase in business throughout the day.

Minister for Public Expenditure and Reform Brendan Howlin last year said the Coalition intended selling Coillte’s forests, but not its land, when he announced the State assets that had been selected for sale.

The Government has since refined the proposal into a sale of the right to harvest the timber. Opposition to the proposal has been growing since late last year.