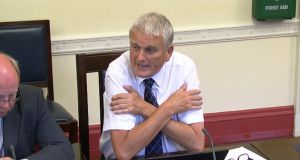 A Dungannon woman who maliciously lied to police attributing homophobic remarks to then health minister Jim Wells in order “to get” him, has been jailed for three months.

Jailing 49-year-old Dorothy Gardner at Downpatrick Magistrates Court, Deputy District Judge Neil Rafferty said he had “thought long and hard” whether he could suspend the jail term, but that “because of the aggravating features that I have outlined, I do not think it would be appropriate in this case to suspend the sentence”.

However, following an application by defence barrister Noel Dillon, the judge released Gardner on her own bail of £250 pending an appeal against the jail sentence.

Speaking outside the court, South Down MLA Mr Wells said he had no sympathy for the mother-of-one who has made unsubstantiated claims she suffers from cancer.

Giving his reaction to the jail term, Mr Wells said he was “surprised” at the custodial term, but revealed he had “asked that an example be made of this lady”.

Among the claims Gardner made in a police statement was that she attended a hustings event in Downpatrick where Mr Wells had told the audience he believed treatment to HIV patients should be stopped and that children of gay parents would be abused.

Paul Symington, the editor of the Down Recorder, who had chaired the hustings event, provided a statement which was markedly different from Gardner’s, outlining that Mr Wells did not make any reference to HIV patients.

A transcript of what he actually said was obtained and showed Mr Wells told the audience that “under no circumstances” would he ever support gay marriage.