Pensioner may have been dead in house since last weekend 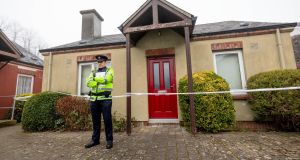 A garda outside the house on Maudlin Street in Kilkenny cit where the body of a woman in her 70s was found. Photograph: Dylan Vaughan

A pensioner was found murdered in Kilkenny after a man contacted gardaí by telephone and claimed a woman had been killed in the city.

Gardaí subsequently traced the call to a man, who led officers to a house on Maudlin Street where they discovered the body of a woman in her 70s.

Gardaí believe the victim, named locally as Ann Butler, may have been dead at her home in a courtyard containing three small houses since last weekend.

The alarm had not been raised and gardaí had no information suggesting any crime had been committed or that there were any concerns for the victim, a vulnerable pensioner who lived alone.

While a postmortem had not yet been completed by Thursday evening the case had been officially upgraded to a murder inquiry.

A man in his 20s who was arrested on Wednesday remained in custody in Kilkenny City Garda station on Thursday and was being questioned about the murder.

He was being held under Section 4 of the Criminal Justice Act which allows his detention without charge for up to 24 hours.

The remains of the victim, who was regarded as vulnerable, were left at the crime scene overnight pending the arrival of a pathologist on Thursday morning.

“The woman’s body has been removed from the scene to Dublin City Morgue where a postmortem will be completed by State Pathologist Dr Linda Mulligan later today,” a Garda statement said on Thursday afternoon.

The house is located among a cluster of three small single storey houses accessed by a flight of steps and is in a secluded area. Gardaí believe locals may not have missed Ms Butley in recent days because they assumed she was isolating in her home due to the Covid19 outbreak.

Members of the Garda Technical Bureau carried out a full examination of the property throughout Thursday while searches were also carried out around the house where the victim’s body was found.

A number of other locations in Kilkenny City were also being searched. It was understood these were linked to the man being questioned.

Gardaí in Kilkenny have appealed for anyone with information about the murder to contact them.