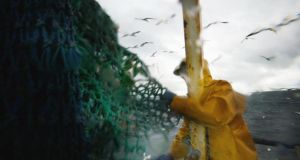 Responsibility for the issue of migrant exploitation in the fishing industry falls to a number of Government and State bodies, including the Departments of the Marine, Justice and Jobs as well as the Sea Fisheries Protection Authority and the Naval Service. File photograph: Chris Furlong/Getty Images

Minister for Marine Simon Coveney has promised weekly meetings to resolve issues relating to illegal use and possible exploitation of crew in the Irish fishing industry.

“This is an issue that needs a whole-of-government response, and it’s going to get one,” Mr Coveney said before his second interdepartmental task force meeting on the issue on Thursday.

“We’re going to meet every week until we actually have an outcome here that reassures people that we’re responding appropriately.”

Mr Coveney confirmed that Garda and Naval Service checks had taken place within the last week.

An Irish-registered fishing vessel was detained by the LÉ Orla off Skerries, Co Dublin, last Friday (November 6th) and escorted into Howth for alleged breach of licence conditions requiring that 50 per cent of the crew are EU nationals.

The Garda Press Office said the vessel was later released following inspections by officers from the Sea Fisheries Protection Authority and Garda National Immigration Bureau. It said there were“no arrests and no evidence of human trafficking disclosed”.

Mr Coveney on Thursday said the authorities have been engaged in operations against such exploitation over the past 12 months.

Such alleged abuse of foreign-national fishermen was recently the subject of an investigation by the Guardian newspaper.

“An Garda Síochána have already raided a number of premises on the back of discussions on this issue. The Naval Service have brought a fishing boat in from the Irish Sea, into Howth I think, because of the construct of the crew,” said Mr Coveney.

“There is enforcement happening, but I don’t want this to be a witchhunt on people who may be here illegally and may be vulnerable.

“We want to regularise the position of people who want to work in the fishing industry and are working here under reasonable conditions but may have problems in terms of visas.”

A fishing industry leader warned against any knee-jerk reaction from the Government on alleged abuse of migrant labour on fishing vessels.

Any knee-jerk reaction ran the risk of forcing into hiding people who may feel they are vulnerable, he said.

“We are committed to resolving this issue, and have been for some years since we raised the issue of work permits for non-EU staff with with former enterprise minister Micheál Martin in 2008,” Mr O’Donnell said.

“We do not condone any abuses, and we want to afford people the necessary protections of their human rights,” Mr O’Donnell said.

Responsibility for the issue of migrant exploitation in the fishing industry falls to a number of Government and State bodies, including the Departments of the Marine, Justice and Jobs as well as the Sea Fisheries Protection Authority and the Naval Service.

“This is an issue that needs a whole-of-government response, and it’s going to get one,” Mr Coveney said. “We’re going to meet every week until we actually have an outcome here that reassures people that we’re responding appropriately.”

He added: “We need to put a solution in place that if there are people coming to Ireland from outside the European Union to work in our fishing industry, that that is done in a planned and controlled and audited way.

He added that the issue was not straightforward because many working in the industry at the moment are not employees.

They work on share fishing arrangements where they are sole traders legally.

“So we can’t deal with this in the normal way by simply applying the work permit system,” he added.

The high level inter-departmental taskforce was initiated to examine a “wide range of issues” identified by The Guardian newspaper earlier this month and involves representatives of the Departments of Justice; Jobs Enterprise and Innovation; Transport, Tourism and Sport; and Agriculture, Food and Marine; and the Attorney General’s office, the Garda, Bord Iascaigh Mhara, the Naval Service and the Sea Fisheries Protection Authority.

Last week, an Egyptian crewman working on an Irish vessel was remanded on bail after he was charged with a breach of the immigration Act when he appeared in court in Co Cork.

Mohamed Elfallah (23) was charged with failing to produce a valid passport or equivalent identification documents at Union Hall pier in Co Cork on November 4th.

Work to stabilise land after ‘suspected tunnelling’ behind terrace could cost €300,000 16:18
Handgun and €300,000 worth of cocaine seized by gardaí in Dublin 15:52
Limerick publicans relieved to open but on alert for Covid-19 threat 15:51
Puppy seized and rehomed while owner in psychiatric facility, court told 15:50
Dublin farmer discovers overnight rave on his land 15:36