We all know a Tom Humphries, even if we don’t know we do

Fintan O'Toole: It would be easier if the men who do these things were not men but beasts 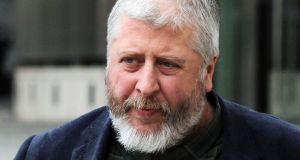 Tom Humphries: the former Irish Times journalist pleaded guilty to two counts of defilement of a child and four counts of inviting a child to participate in a sexually explicit, obscene or indecent act. Photograph: Courtpix

Pervert. Sicko child abuser. Journo beast. After Tom Humphries was, in the telling term favoured by the tabloids, “caged” for grooming and sexually abusing a vulnerable schoolgirl, their headlines paraded the usual lexicon of monstrosity. To which one can but say: if only. If only the men who do these things were not men but beasts.

The terms are intended to shock us, to inspire, as the front page of the Herald blared on Wednesday, “Outrage & Disgust”. But they give false comfort. It would be so much easier if the pervert, the sicko, the beast were indeed another species, an alien creature – and not, as he usually is, one of us.

The much more difficult truth is that everyone reading this knows at least one abuser. Some know in the most terrible, intimate way, by carrying deep within themselves the damage of the survivor and the memories of violation. Some know a friend, a colleague, a neighbour, a family member whose crimes have been exposed and punished.

The abuser is a good bloke, a decent skin, a pillar of the community. He does not have the mark of the beast on his forehead

But most people don’t know that they know. The abuser is still just a friend, a colleague, a neighbour, a family member – a good bloke, a decent skin, a pillar of the community. He does not have the mark of the beast on his forehead.

Coming up to Christmas 2000, I had a visit at home from a long-time family friend. He was a Christian Brother, teaching at a school in west Belfast. I’d stayed with him a number of times when I was reporting on the Troubles and the peace process.

He was really charming, very articulate, handsome, warm, well read, great company. And he was great with kids. I watched him run the computer club at his school and the way the kids were drawn to his energy and charisma. I watched him swing kids around on the street, laughing, joking, being a grown-up pal to children who were living with violence and trauma in what still felt like a war zone.

When he came to see us that Christmastime we sat in the kitchen for a while, talking about what it was like to be a decent Christian Brother at a time when the evidence of the order’s horrific history of abuse was on the news every second day.

The Christian Brother told us how people made awful assumptions. Three weeks later he pleaded guilty to 25 charges of indecently assaulting three children

He talked about how hard it was, how people made awful assumptions about you, how guilt by association tainted all the good work he did with troubled children. Before he left he went up to our sons’ bedroom to say goodnight. On the doorstep he thanked us for letting him talk about all of these unjust suspicions.

Three weeks later he pleaded guilty at Belfast Crown Court to 25 charges of indecently assaulting three children between November 1975 and September 1981. He had begun by abusing a 12-year-old girl before preying on her 11-year-old sister and then turning his attentions to their eight-year-old brother. The two girls felt so trapped that they remained in a relationship with him until they were in their 20s.

He was a classic abuser: controlling, manipulative, able to draw his victims into a web of forced collusion and psychological control from which it took them a decade to break free.

When the news broke I thought back on that evening in my house a few weeks earlier. At that stage he must have been charged and probably already knew that he was going to plead guilty. So what was the charade all about?

It struck me that, of course, he thought he would remain anonymous. His identity would be concealed to protect the anonymity of his victims. What he didn’t know is that the siblings had decided to waive that right, so that he would indeed be named.

And what he thought, I assume, is that, after a short spell in prison, he would just turn up again on the doorsteps of his friends in Dublin, with some story about being away on a retreat or a course. And none of us would be any the wiser. He would be his same charming, confident, smoothly chatty self – not a caged beast but a decent bloke.

The same, of course, might well be true of Tom Humphries had he not made a mistake with his mobile phone and if his family had not had the extraordinary courage to take what they discovered about him to the police.

In Humphries’s case he would not just still be a colleague of mine; he would still be a real figure in national life.

It is grotesque that Humphries’s former eminence was used to justify his very light sentence of 2½ years. If anything his great talent, his high intelligence and the self-awareness that comes with writing for a living leave no shred of an excuse that he did not fully understand what he was doing to his victim and what the consequences for her would be.

But the misuse of the “fall from grace” argument should not blind us to the obvious truth that Humphries’s professional eminence was real. He didn’t write like a beast; he wrote like an angel. More than that: he wrote with apparent moral purpose. It took real moral courage to do what Humphries and a handful of other journalists did in the wake of Michelle Smith’s dazzling triumphs in the Olympic Games of 1996.

The swimmer was Ireland’s golden girl. She had become, from nowhere, easily the most successful individual in the modern history of Irish sport. She was brilliant and beautiful and a wonderful role model for the new Ireland that was strutting its stuff on the world stage. The whole country was desperate to believe in her.

Humphries’s relentless raining on the parade took not only forensic skill and great writing but also a fierce bravery, an apparently unshakeable commitment to plain truth.

I did not know Tom Humphries well, but I admired him hugely. I thought in those years that he was the best journalist in Ireland. I’m sure that if media students asked me I would have pointed to him as someone whose refusal to tell people what they wanted to hear they should look up to and try to emulate. He stood for something: the great journalistic value of not going with the flow, not abandoning the duty to be sceptical, even when everybody wanted you to just smile and cheer.

And I’d love to say now that the thing about my Christian Brother friend or about Tom Humphries is that they were split personalities, half human, half beast. But that’s a cop-out. The qualities that made the Christian Brother so charming to me, so likable and such good company were not different from the qualities that allowed him to worm his way into the trust of a family and abuse its three children. They were exactly the same qualities.

Some abusers – a Harvey Weinstein, a Donald Trump, a parent with a very young child – are in a position to use raw power to dominate their victims. But most have to become actors. Grooming is all performance – the performance of care, of compassion, even of love. Beasts can’t do that; only people can. You have to understand, and at some level convince yourself that you really feel, the human needs for tenderness and reassurance that you will so ruthlessly exploit.

And at least some of the qualities that made Tom Humphries a great journalist also fed into his crimes. In part the relentlessness that is needed for the pursuit of a story becomes the relentlessness of the 16,000 texts he exchanged with his victim.

But, more subtly, there is something you need if you are to spend a long time, as Humphries did on the Michelle Smith story, with at least half the country hating you. You have to be able to construct a room in your head where you house a thought: I don’t care what anybody thinks of me; I’m a good person.

And that necessary capacity for compartmentalisation is also, of course, what abusers use. The secret room in your head where it doesn’t matter what anyone thinks of you is also the room in which you justify the terrible exploitation of another human being.

Calling abusers monsters is a way of evading this much more uncomfortable reality. And it diminishes their responsibility. The sicko pervert is a freak who indulges volatile, inexplicable impulses, a slave to sudden dark compulsions.

But there’s nothing impulsive about most abuse. My friend in Belfast didn’t move on impulse from one child to another in the same family. There was strategy, calculation, deliberation.

Tom Humphries didn’t pick his victim at random: he looked for vulnerabilities he could exploit and established his power over a long period of time. This kind of abuse is far from mad. It is cool, rational, a careful matching of means to ends. It is, disturbingly, much more like ordinary productive activity than it is like the deranged behaviour of the stereotypical sicko.

What we have to confront is not the strange, disgusting, alien awfulness of sexual violence. It is its normality.

Sexual violence is part of our male-dominated culture. It exists on a spectrum that stretches from slyly humiliating sexist remarks in the office to rape and murder in the dark alley. It incorporates everything from Twitter trolling to child rape, from one-off harassment to systematic bullying. It happens everywhere from the supposed safety of the home to the hellish terrains of civil wars. And at its heart is the most normal thing in the world: male power.

Abuse is not about the search for sexual satisfaction. It’s about the search for domination. The attraction is towards unbounded power over the bodies and minds of other human beings. As Donald Trump put it in the tape in which he boasted about grabbing women: “You can do anything.”

“Anything” includes sexual acts, but those acts are not in themselves the point. They are the physical expressions of a much larger, deeper and more mundane desire: the craving for dominance that men are taught to feel by so many aspects of the world in which they grow up.

That craving is all around us all the time. Its most horrible expressions may be in the sex offenders’ units of our prisons, but it runs deep in everyday behaviours, in institutions, in attitudes and assumptions.

The law can and must try to protect women and children and to punish perpetrators. But it is not enough to mentally consign those perpetrators to exterior darkness. The line between the perverted and the ordinary is much, much thinner and more porous than we like to think. We will make it high and strong only when normality becomes a place where children are safe and women are equal.